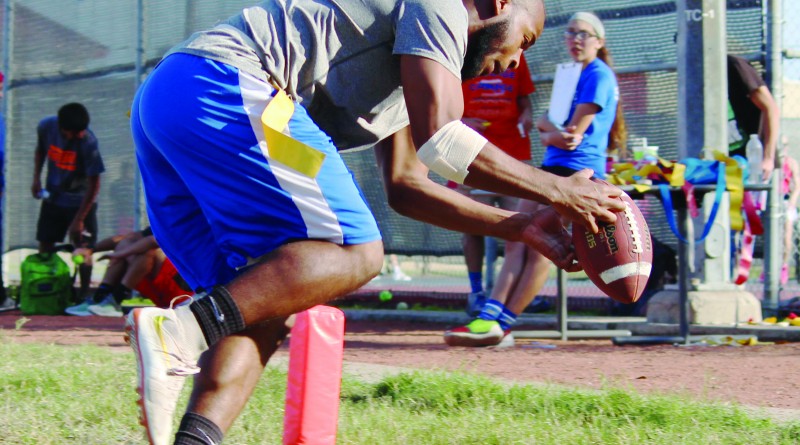 The NFL season has been over for a few weeks, but intramural flag football quickly filled the void for some.

Unfortunately there was not a huge turnout this semester as compared with the fall semester, when there was over eight teams playing competitively. This time around only four showed up to play, which led to several games of the same four teams over two weeks — two Del Mar teams, two from Collegiate High School.

With the second college team not showing up it was determined a semifinal round between two Collegiate teams would play with the winner facing the undefeated Team Patriots. This set up the game between Team Max and Team DB’s, which came to be very entertaining.

Team Max started with the ball and drove it down the field for a touchdown. Team Max was able to score again as they had intercepted the ball for another touchdown. Luckily Team DB’s was able to hit the endzone before the half, making the score 14-8.

At the start of the second half DB’s turned the ball over, giving Team Max another score to make it 20-6, and this is where Team Max collapsed like the Falcons in the Super Bowl. With 4 minutes left in the game Max played lax and paid for it as DB’s scored again and again after two failed drives by Max.

Now DB’s had to face Team Patriots, who were cold to start but with no real threat to the defense stalled the drive. Team Patriots didn’t miss a beat as they scored on the second play of the drive with a catch and run by Tevin Battle. DB’s again couldn’t keep the drive alive, leading to another connection from quarterback Gage Freeland to receiver Battle. DB’s got it going with a pass from James Craig to Tre Zambrano for a touchdown. A quick score from Patriots Freeland to Roland “Mike Mike” Olivarez and an answer back from DB’s Craig to Carlos Alaniz made the score 30-16 at halftime.

The Patriots started with the ball and kept the theme of scoring on every drive alive with another Freeland-to-Olivarez bomb. DB’s got started on their first drive of the half, getting to the endzone via a Craig to Alaniz connection, which proved to be their last score due to back-to-back interceptions by Patriots Battle for touchdowns as well as a trick play that had Battle throwing it to Freeland for a touchdown completed the game with the final score 54-24.

Afterward Battle was proud of the Collegiate students’ effort, saying: “They did great. They were competitive till the end and even beat a Del Mar team in an earlier exhibition. As young men you relish the opportunity to compete and since this is their only athletic outlet it’s great to see them out here actually playing and not giving up.”

Intramural volleyball is next and starts in the gym on Feb. 21, so be sure to sign up for some fun and an opportunity to win a T-shirt.