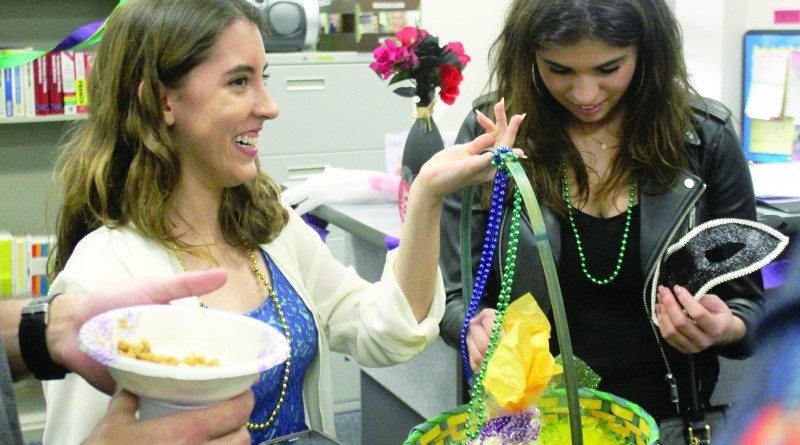 Selena Belcher poses with the lucky coconut she won during a trivia game at the Foreign Language clubs Mardi Gras celebration.

Passing through the yellow, green and purple banners that led into the Foreign Language Club’s Mardi Gras celebration, the smell of Cajun spices was prominent, the sounds of jazz were soothing and immediately, the atmosphere was festive and fun.
On Feb. 27, the Foreign Language Club held a party to celebrate the French holiday of Mardi Gras, something found prominently in Louisiana, and even more specifically, New Orleans. An array of traditional food made by students lined a wall and traditional games being played by students filled the room.
The event was meant “to practice French and celebrate something connected to French culture,” said French teacher Yuliya Kruchkova.
“We decided to give them some ideas,” Kruchkova said. “In Louisiana, they throw coconuts and to catch them is good luck. Some didn’t have money so they used coconuts and now they’re the more valuable of the prizes.”
The event was open to all students who wanted to attend, even being offered to some as extra credit. But the event tried hard to ensure that education and fun were mixed, offering various games with a French twist including a coin toss, vocabulary bingo and musical chairs to the sounds of jazz.
“We want to encourage people to learn a different language, to celebrate Mardi Gras and we wanted to let people know what Del Mar offers,” said Selena Belcher, member of the club and recipient of the prized coconut.
The night also held a talent show featuring students singing French songs for their peers. The contest, which ended in a tie, resulted in the prizes being shared among the attendees.
“(The French and Spanish sides of the Foreign Language Club) are very close. It was put on by both. We decided to do this for the kids, a cultural celebration … a social gathering with an emphasis on promoting language,” said Javier Morin, assistant professor of Spanish. “We want to do it again. We’ll have a Cinco de Mayo event and possibly something during the summer.”
The Financial Aid Office also got into the spirit, decorating the second floor of the Harvin Center and handing out cake, beads and other goodies. Financial aid representatives were on hand to answer students’ questions and give out information on aid and scholarships.