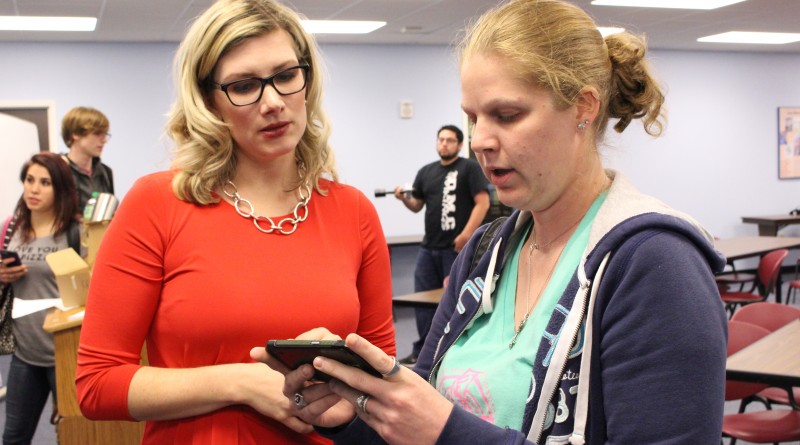 While research can often be an arduous task, it’s the pursuit of the facts that hooked KRIS-TV investigative reporter Jessica Savage on journalism.

“We had a research paper on our hometown to pick something they might find interesting,” Savage said of her time as a student at Southern Methodist University. “I’m from Savannah, Georgia, one of the most haunted cities in the U.S., and I really got into the research.”

The one-time business major, who spoke to Del Mar students as part of the Comm Week Speaker Series, hasn’t looked back. Savage, who worked as a reporter for the Caller-Times then with the city before joining KRIS-TV, shared advice with students on interviewing, discovering the truth and the importance of communication.

One of Savage’s most recent investigations was into the background of then-Mayor Dan McQueen, who falsely claimed to have an engineering degree and who hired his significant other as his chief of staff. McQueen stepped down after just over a month as mayor. The experience summed up what was perhaps Savage’s most important advice.

“Never stop asking tough questions. Don’t be intimidated by somebody. Keep an analytical mind behind you and be open-minded, too,” Savage said. “You never know what someone is going to say unless you ask the question.”

That advice stuck out to student Clayton Reichert.

“I really liked her ending quote to be prepared to take the next step and have an analytical mind,” Reichert said.

Sara Flores, who got her associate degree through reverse transfer from Del Mar to the University of Texas – San Antonio, also spoke for Comm Week. Flores, host of KEDT’s “Morning Edition” and “Midday Report,” discussed about her career at KEDT as well how starting as an English major and minor in film studies helped her become who she is today.

“I started when I was majoring in English. I took creative writing at UTSA and quite a few schools,” Flores said.

Flores got her career in KEDT by working at an auction and established relationships within.

“That was how I made a lot of relationships and cemented that I wanted to be there and was a great time to figure out how it all works,” Flores said.

“If you’re on a path, I definitely recommend just leaving yourself open to things that may not seem like they’re quite on that path,” Flores said.

“I learned that there is more you can do in your field of work and you don’t have to wait to get your degree to get your goal started right away,” Massengill said.