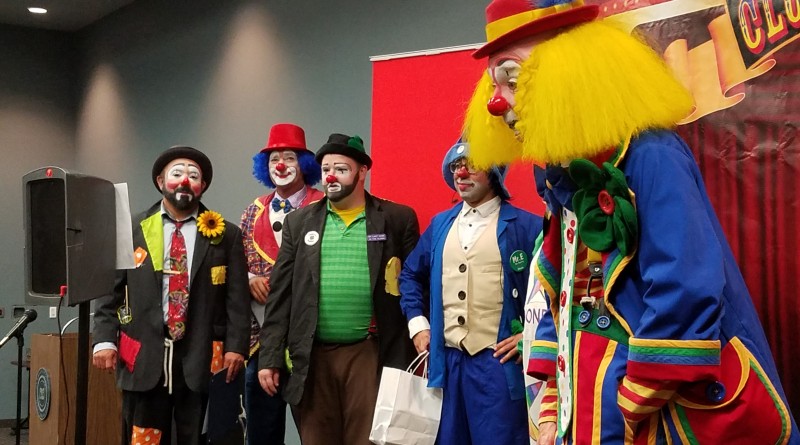 With electric yellow hair, a big red nose and giant shoes, Lanky the Clown set up the stage in the minutes before the ceremony. Then six colorful clowns performed tricks, skits and jokes at the Del Mar Clown School graduation on April 18.

“I did stand-up comedy before this. Now I’ve been a clown for two and half years. My best friend owns a magic shop and needed a new clown,” said Ben Abbott, aka Lucky the Clown, who added that the smiles he receives are the best part. “I’ve had people come up to me and tell me that I’ve turned their day around.”

The clown course takes place once a year for six weeks and teaches students the do’s and don’ts of being a clown and the skills necessary to have a career in the clown field.

The Del Mar Clown School has had 15 classes of clowns graduate in the past 20 years. Every year, the classes end with a show that serves as their final exam.

“It’s a rite of passage so that you can clown around,” said Roy Cantu, or Reset. “It’s the first gig for a lot of us. I’m a little nervous but excited at the same time.”

The interactive show spurred laughs from the audience as they got to make music and play along with the acts.

“Being a clown looks really fun,” said Cody Lankford, who attended and participated in the presentation. “My dad is a clown and I wanted to see him graduate. He practices and does his makeup … it’s awesome and funny.”

One thing the students conveyed is that you can’t always teach the things you need to be a clown — it has to be in you from the start.

“I didn’t have a choice, I’ve always been a clown,” said Barry Lankford, Cody’s father and new graduate Snappy the Clown. “I just didn’t have the makeup before.”