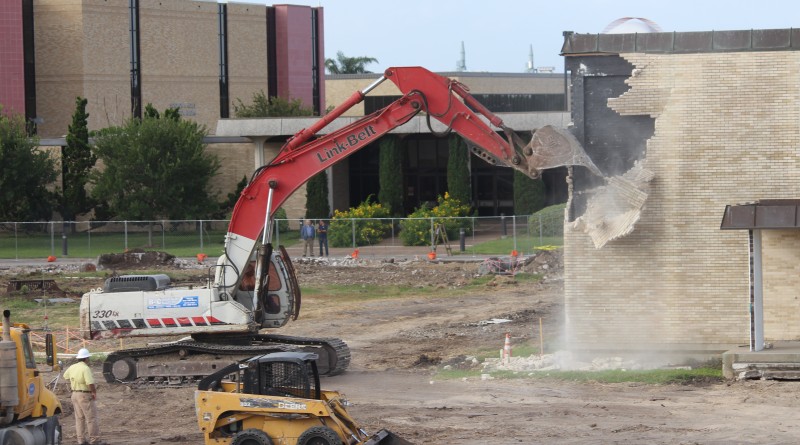 Students who took the summer off will notice there is one less building on East Campus.

Five decades after it was built, the English Building was torn down in preparation for the new General Academic and Music Phase II building.

The project was funded by a $157 million bond passed by voters in 2014 and is estimated to cost around $46 million. The building, a project of Richter Architects and BRW Architects, is expected to be completed by August 2019.

The 127,500-square-foot project will house the Division of Arts and Sciences and the Departments of English and Philosophy; Communications, Languages and Reading; Mathematics; and Social Sciences. The building will also complete the new facilities for the Music Department started in Phase I.

“It’s good because we have worked hard to get to this point and get this building that is needed for East Campus, but bad because the building is one of the oldest buildings and a piece of Del Mar’s history,” Alfonso said.

“The College has taken a great step forward in providing cutting-edge instructional facilities in its planning for the $46 million General Academic and Music Phase II building on the East Campus,” Jackson said.

“At the heart of the new complex will be the Mike Anzaldua Plaza, named for the late English professor emeritus, with shaded outdoor spaces for individuals and small groups to enjoy. Inside the new facilities more informal collaborative space will allow students to work in small groups and connect with faculty one-on-one,” Jackson said.

Aside from the new building, improvements will be made to numerous buildings across both East and West campuses. At East Campus, work includes major repairs for some buildings, repurposing the Administration Building to serve as a student enrollment center and adding new accommodations to existing buildings. The West Campus will see new expansions for buildings and programs along with improvements to facilities.

Once construction on the new building is finished, Heritage Hall will be the next building to be torn down.