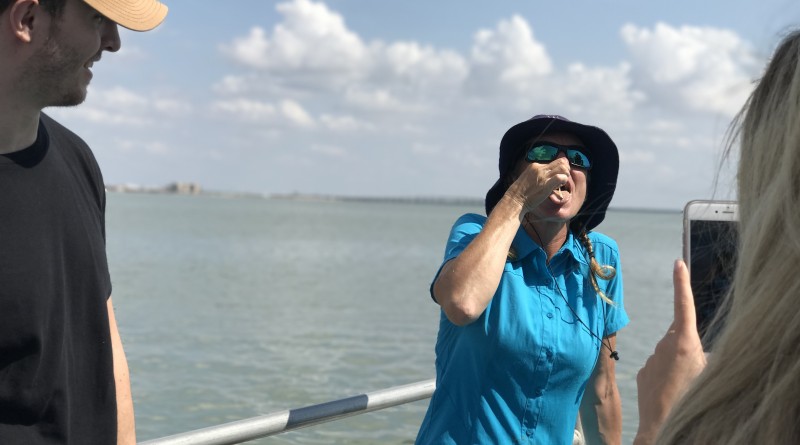 Captain Whitney Curry takes students by surprise when she places a raw anchovy on her tongue, as they all stand around laughing and recording with their phones. 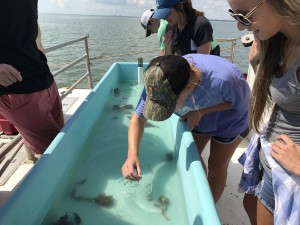 Professor Lillian Bass and Biology 1409 students set out on the floating classroom, the Archimedes Educational Cruise, to witness the evolution of living organisms.

More excitement comes when Bass explains she’ll give five extra points on an exam if three students eat the three raw anchovies left. As everyone looks around in concern and eagerness, three students step forward to eat them and everyone laughs as they do so.

“I really think people need to get outside more, it adds a whole different aspect. I love to see other people appreciate what’s out there,” Bass said.

“Particularly with evolution, I have had a couple of students but there’s one in particular where … he refused to study evolution, he didn’t believe in it. One doesn’t preclude the idea of a greater being, in my mind, it can fit together but some people are not as open,” Bass said.

On the Corpus Christi Bay, between the Lexington and Texas State Aquarium, sits the 57-foot red and white Archimedes ship. Students step on and make their way to the top of the boat and sit below the beaming sun, waiting to set out.

On board, Captain Whitney and Bryan Curry reel in the first net of organisms and place them in a tub of water, if the organisms are not dangerous. Students rally around with fascination of crabs, anchovies, catfish and other organisms.

“Do you think snail shells grow with the snail or are interchangeable?” asks Captain Whitney, when observing snails. Many shout out different answers.

She explains to students the trouble of the Texas Education Board not requiring Texas Essential Knowledge and Skills (TEKS) on snails. She adds that the younger generation gets confused with the television show “SpongeBob SquarePants” because the snail character Gary buys and replaces his shell, which is not factual.

After about 20 minutes, students reel in another net of organisms, this round catching a starfish, from the phylum echinodermata, which consists of marine animals.

Biology student Rosina Salas was captivated by the prominent organism.

“I love the starfish, that was really cool because I had never really seen one upfront, it was always behind the glass in an aquarium. To be able to catch one, that was amazing,” Salas said.

At the end of the educational cruise, Captain Whitney tells students she once found a shotgun with the serial number filed down, and one of her favorite treasures of the ocean, a cowfish.

Salas said she’ll be graduating with her bachelor’s degree in business, and that biology 1409 was a struggle. She added that she was glad to share the experience with other non-science major students as they studied the evolution of living organisms.

“I love the trip. It was very peaceful and relaxing, although it was hot I enjoyed the view. It’s a shame not everyone gets to enjoy the beautiful Corpus Christi Bay,” Salas said. “Just being out there and actually looking in at a different perspective was just beautiful.”