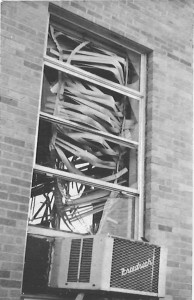 Texas has been through major hurricanes before, some worse and others less destructive than Harvey.

The 1900 Galveston Hurricane made landfall on Sept. 8 and is known as the United States’ deadliest natural disaster in history. Like Harvey, it was a Category 4, with 145 mph winds.

With a population of about 30,000, 10,000 overlooked the storm and stayed. With the new innovation of the telegraph and the Weather Bureau station, there was notice of a hurricane according to the National Weather Service report.

The deaths were incredibly low compared with the Galveston storm, due to the massive evacuation that took place from Victoria to Dallas. At the time, it was the county’s largest evacuation, with about 250,000 people escaping the shore.

John Metz, warning coordination meteorologist at the National Weather Service Corpus Christi, said the last time a storm had such intensity as Harvey was Hurricane Carla.

“It was very damaging and deadly and had wind speeds a little stronger but somewhat similar in magnitude,” Metz said when comparing Carla and Harvey.

In Texas, Carla made landfall as a Category 4 hurricane. The recorded winds were about 170 mph in Port Lavaca and a 22-foot storm surge at Port O’Connor, leaving damage all over the coast. In Galveston, 200 buildings were severely damaged. The destruction was estimated at $408 million, which in today’s money is $3.3 billion.

The next major hurricane to slam Texas was Hurricane Celia in 1970. The storm made landfall north of Corpus Christi and worked its way into the rest of the Coastal Bend. The storm hit Port Lavaca as a Category 3, with winds of 130 mph, according to the National Weather Service.

“The cost of repairing the damage inflicted upon both the main and Technical campuses by Hurricane Celia may run up to half a million dollars…,” according to a Sept. 2, 1970, Foghorn News article.

Hurricane Rita struck in 2005, reaching a Category 5 before hitting the Texas-Louisiana border. On the heels of Hurricane Katrina, Rita is usually forgotten.

The storm appeared nearly less than a month after Katrina and led to the evacuation of 3.7 million from Corpus Christi to Beaumont, according to a 2006 report from the Texas House of Representatives.

Seven were confirmed dead, according to the National Oceanic and Atmospheric Administration, with damages estimated at $10 billion.

The last major storm before Harvey to affect South Texas was Hurricane Ike, with 28 confirmed deaths in 2008.

By the time Ike made landfall over Galveston on Sept. 13, it had increased to a Category 4. With a total population of 60,000, 50,000 evacuated and about 80 percent of homes were flooded. The water destruction left challenges to recover for years.

Metz said as a coastal community it’s important to be aware of the hazards of living along the Texas coast.

“This is a hurricane county, it always has been. As we build our homes and our businesses we have to be cognizant of that and build to a higher standard,” Metz said. “The sea levels are rising in this area, so for long-term planning it is important to known that storm surge is the deadliest hazard associated with each storm.”

As Hurricane Harvey has ended, the estimated cost is about $180 billion, according to the governor. About 100,000 homes, from the Coastal Bend to Houston, were flooded or torn apart by the hurricane. At least 70 are dead due to Harvey, including a lineman electrocuted outside of Bloomington when trying to restore the electricity.