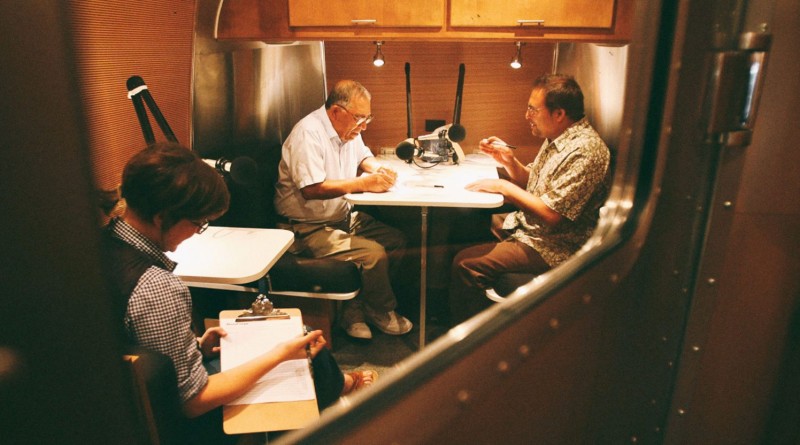 A rainy day did not stop members of Del Mar College and KEDT from coming together for the kickoff of StoryCorps coming to Corpus Christi.

StoryCorps is a nonprofit organization that was created to record the conversations of everyday Americans, which are then logged in the Folklife Center in the Library of Congress. It has become one of the largest oral history projects, with over 65,000 interviews from all 50 states, and will now include 150 conversations from the people of Corpus Christi.

The kickoff opened with Don Dunlap, the KEDT president and general manager, saying he is excited that StoryCorps is going to record “the stories of people in our community.”

Dunlap then went on to introduce Trey McCampbell, chairman of the Del Mar College Board of Regents, who spoke about the importance of working together and telling your story.

“I look forward to StoryCorps’ work in the community,” McCampbell said, “and I also look forward to recording a conversation with Dr. Escamilla later next week, but also to be in an Airstream.”

Morgan Feigal-Stickles, who was in Corpus Christi with StoryCorps, told the crowd about the mission behind the project and what it can do.

“It is an opportunity for communities to tell their own stories,” Feigal-Stickles said, who noted that nowadays communities can be misrepresented by the media.

“We hope that through the broadcast we can show our shared reality,” Feigal-Stickles said. “It is rare for us to sit down for 40 minutes, without our phones, and talk to someone you love and listen to their stories.”

One of the first conversations recorded was with DMC Regent Susan Hutchinson with former Mayor Nelda Martinez.

Hutchinson said the experience was “fascinating” and they talked about multiple things, from old stories of her and Martinez’s past to Hutchinson’s late husband.

“We talked about my late husband, Owen Hopkins,” Hutchinson said. ”I did this for him, to preserve his legacy. I did it all for him.”

One thought on “DMC, KEDT join forces for StoryCorps project”