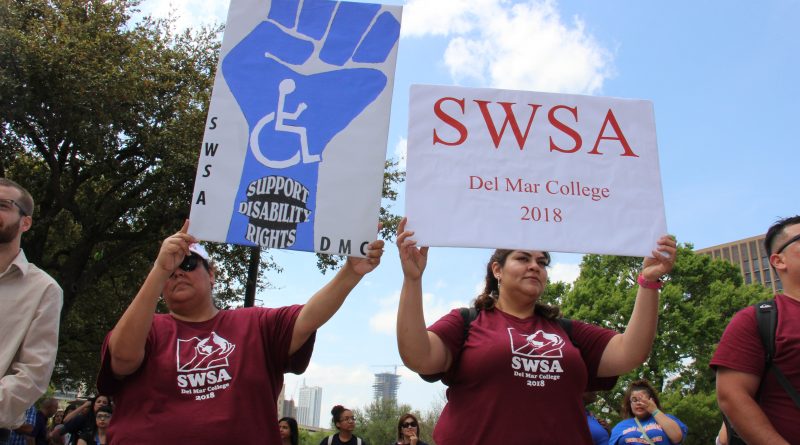 Del Mar group joins others from colleges across the state

Noe Ruiz, a first-year Social Work Student Association member, was in for a long ride to Austin with high hopes and great intent. During his first visit with the Del Mar club to Student Day at the Legislature in Austin, Ruiz and six other students got to experience their passion for social justice with a community of students who are fighting for the same causes.

On March 26, the group joined universities from all over Texas to hear a panel of social work advocates, join in group activities and rally to the Capitol with signs to speak at a podium about issues we face as a society. Systematic racism, poverty, gun reform, homeless veterans and immigration wee among the topics discussed.

“It’s just helping others, and making a difference. I got involved because I’m a veteran,” Ruiz said as he marched to the Capitol. “This helps me out with all the problems that I’ve got; it’s an escape. It helps me become more comfortable with myself.”

The University of Texas at Austin hosts this event every other year in the Shirley Bird Perry Ballroom, but it was Del Mar’s first time showing up. Del Mar was the only two-year college among bachelor-level universities such as Baylor University, Texas State University, UT and many others.

“The Capitol doesn’t really ‘know’ what social workers do,” said Will Francis, government relations director for the Texas Chapter of the National Association of Social Workers and one of the panel speakers of the event. He encouraged students to push change to their legislative officials on a local and state levels.

“In reality, you have the right to talk to anyone,” Francis told the crowd.

The Del Mar team had been preparing for the event all month, including making signs and T-shirts that read, “Be the change you wish to see in the world,” by Gandhi on the back.

After listening to the panel speakers and asking questions, students gathered outside to march to the Capitol where they and officials took turns giving three-minute speeches about select issues. The crowd was made up of Austin residents and hundreds of college students from around Texas.

The club not only sustained the Austin heat to attend this event, but had also been fundraising for months prior through multiple bake sales and a Valentine’s Day raffle, according to Imani More, who has been with the club since last year.

“We got a feel of what really goes on for social work,” Moore said. “We got to talk to the other kids at bachelor programs to know what to expect.”