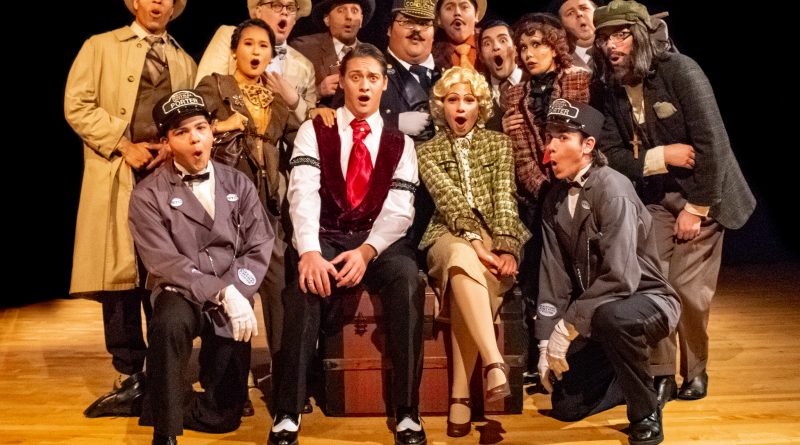 Del Mar’s Fall production, “Twentieth Century,” was the Drama Department’s masterful undertaking at whisking its audience to a Depression-era setting, while also displaying what travel was like aboard the famous Twentieth Century express train.

The play, an adaptation of a script written by Ben Hecht and Charles McArthur, concluded its run at the Finley Theatre on Nov. 17.

The production, set in the 1930s aboard the train en route from Chicago to New York City, provided stylish entertainment with heavy doses of humor, as it centered on a despairing and nearly broke Broadway director who is frantically trying to jump-start his career.

The director, Oscar Jaffe (played by Logan Berger), the play’s protagonist, is portrayed as outspokenly brash and amusingly deceiving as he attempts to display his self-worth and potential while thwarting other outlandish characters, including rival producer Max Jacobs (Dalton Allen), a long-haired bearded eccentric (Lucas Brown), and Biblical quoting extremist/businessman Matthew Clark (Jacob Miller), who hilariously make his task at self-renewal all the more complicated.

In the midst of all the chaos, Jaffe tries to coax his former lover/mistress Lily Garland (Kyrstin Garcia), a sultry, high-class chorus girl now an accomplished Hollywood star, to accept a role in his next show that will certainly re-establish him as a competent artist. But he is met with steadforth failure, as Lily refuses to be taken in by his attempts at flattery and romantic notions. The exchanges between the two characters provide an essentially amusing storyline.

The production displayed a slight parody to certain elements depicted in the 1974 theatrical film “Murder on the Orient Express,” in which a group of distinguished characters are also shown traveling aboard a high-speed passenger train set in the 1930s. But unlike that film, where the plot involves a murder mystery being investigated by a British detective, the storyline in “Twentieth Century” involves a lighthearted and comedic plot where the characters are all shown amusingly at odds with an artist trying to re-establish recognition for himself. And again, unlike Express, the train’s route is set in America, from the Windy City to the Big Apple, rather than from Istanbul to London.

I viewed the play during the Student Appreciation Night showing on Nov. 15, and I found it highly amusing and marvelously performed by an impressive cast of 15 actors. The Del Mar Drama Department did an outstanding job with the construction of the stage set, the lighting and sound effects. The sense of train travel was realistically depicted.

With is rather suggestive subject matter and a scene of violence involving a discharged firearm where the bullet makes its way into the Oscar Jaffe character, “Twentieth Century” was given a PG-13 rating, and was obviously not suited for young children. But for those adult audience members seeking fast-paced, comical action in a highly realistic stage setting, it was an all-around satisfying piece of entertainment.