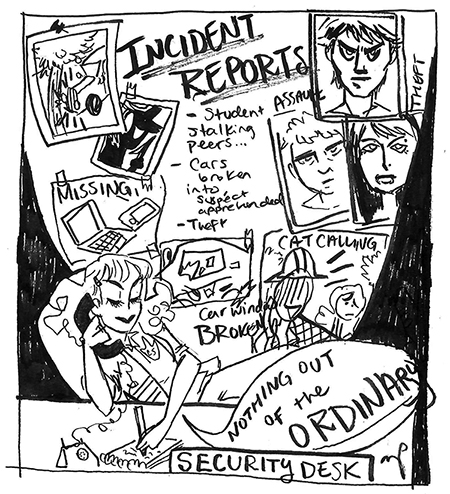 When you get into a car accident on campus or have something stolen, students and staff are encouraged to fill out an incident report with campus security. But alongside these vehicle mishaps and missing laptops, there are serious circumstances such as a student being stalked by another student, trespassers on campus and students being catcalled by the construction crew.

Recently, the Foghorn News staff asked Campus Security for a copy of the incident reports from January through June and there were only 10. Three were in January, four in February, one in March and two in June. They ranged from a homeless man putting on a sweater to keep warm and being told to vacate the Center for Economic Development parking lot to a DMC student being threatened by a male subject in the Richardson Performance Hall parking lot on the East Campus.

The staff then asked for the incident reports from July and August. According to the security office, there was a stack of reports they had to go through to compile the list for us. After a week of waiting, there was only one incident report on the list; it dealt with a male trespasser near the Aquatics Building on the East Campus.

The news staff decided to file a Texas Public Information Act request, which requires the full or partial disclosure of public information and documents upon request, for any reports from the months of June through August. After six weeks, the staff received the redacted reports. (Personal material such as names or license plates are often redacted in such cases out of privacy concerns.)

In those reports, there were 47 during June through August compared with the three given when we first asked. All of these reports are public information and every member of the DMC community and public should have access to these incidents for their own safety.

Many reports were small and nothing to be concerned about, but some should be made known to the public for students’ safety. Yes, we have the Annual Security and Safety Report that can be accessed every fall semester via the Clery Act, but that report simply lists the number of each type of crime committed. It doesn’t offer specific details we should know and be aware of.

Most of the reports the staff got from filing the information request were car accidents, items being reported stolen or students getting harassed. On July 29, a DMC student reported a male student was following her and bothering her since the 2018 fall semester.

An incident that happened on June 4 dealt with a male suspect walking into the Fine Arts Building on the East Campus and drawing stick figures and bottles while claiming to be the teacher of the class.

These are just three reports that the Foghorn News staff had to wait for. And the 47 reports are only for three months.

The Clery Act was meant to have all institutions of higher education provide timely warnings of crimes that can be defined as a threat to students and faculty to the institution. Although we may be given crime-based statistics, the annual report lists incidents that by then are often several months old.

There are more than 12,000 students and staff members at Del Mar College. They walk into this place convinced that they are safe yet there are many things that happen that everyone has the right to be aware of. Gaining the knowledge and realization of the things that do happen, we can have the opportunity to prepare in case they later happen to us.

Limiting our awareness and ability to prepare is dangerous. It is not fair to the new college student who goes to and from class every day, unaware that there is a person who stalks other students and the stalker has class with that student. That student is not going to know how to act and approach a situation if and when that stalker approaches them.

Instead of taking that awareness away from us, make it known that there has been an incident of theft so students are reminded to be more aware of their surroundings. As college students, we are here to get an education that requires the majority of our attention. Having that reminder is good when we are swamped with loads of work.

Awareness for faculty is important since they are the main point of contact on campus for most students. It would allow the staff to have knowledge of what to do if and when they see situations that need to be reported. Faculty should be allowed to have the opportunity to alert students when they see something that is not right. The cognizance can help remind staff to be aware of persistent situations.

We the editors challenge the administration to email the full and complete security report to all DMC students and staff at the end of each month. All of these reports are public information and should be easily accessible to us with every single incident.