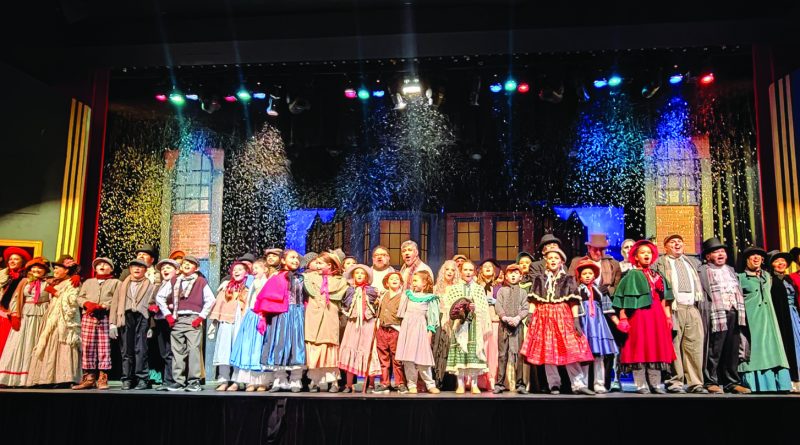 The Harbor Playhouse has kicked off the holiday season with Charles Dickens’ “A Christmas Carol,” a can’t-miss play that you can take your whole family to enjoy.

The play adaptation is exactly what you would expect, a charming play that captures the essence of Christmas. The production as well as the acting in this play is phenomenal. Each character played their part perfectly, each song was sung with great passion, and the costumes and choreography were paired together impeccably.

“A Christmas Carol” is led by Andres Elizondo II, who plays Ebenezer Scrooge. Scrooge is a grumpy old man who hates Christmas. He refuses to donate any money to charity and declines his nephew’s invite to a Christmas dinner. He is rude and unkind to anyone who approaches him concerning Christmas. He overworks and underpays his only employee, Bob Cratchit (Christopher Salinas), who has a very sick child named Tiny Tim (Genevieve De La Garza).

When Scrooge returns home, he is visited by the ghost of his former business partner Jacob Marley (Bryan Davis), who informs his he will be visited by three ghosts — the ghosts of Christmas present, past and future. The ghost of Christmas past (Eliot Ruiz) shows how he struggled as a child because of his father going into debt but the ghost also shows him how happy he used to be when he was surrounded by friends and family during the holidays.

The ghosts teach Scrooge a lesson to show he needs to change his ways. Scrooge wakes up on Christmas Day and decides to buy the prize turkey and help as many people as possible by donating to charity, giving the turkey to his employee, and going to his nephew’s home to enjoy Christmas with his family.

While all the actors were great, Josh Salinas and Dr. Stefani Schomaker stood out for their hilariously perfect roles as Mr. and Mrs. Fezzwig.

The play continues through Dec. 19 with showings at 7:30 p.m. Fridays and Saturdays and 2:30 p.m. Sundays. For tickets or more information, visit www.harborplayhouse.com.