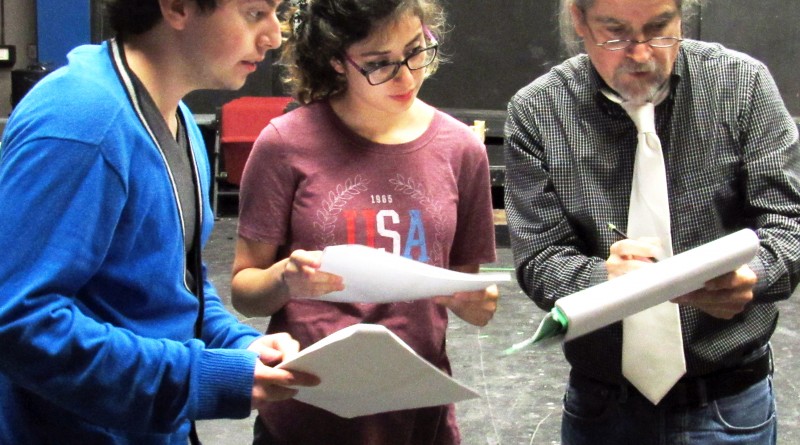 From Left to Right: Michael Seibert, Bianca DIaz, and Kim Frederick discuss the direction of “Androcles & the Lion”

An imagination during his childhood was all drama professor Kim Frederick needed to embark on a journey that would move in a positive direction, although along the way challenges would arise.

“Every kid plays…” said Frederick while reflecting on his 29 years at Del Mar College. “These games turned into a job for me.”

“When he got his award at TETA, in his speech you were just drawn to him and his personality,” said former student Derek Rhein, who attended the conference in January in Galveston “He was a great professor. He has a real big heart and would do anything for his students.”

“I really loved my theater teacher in high school and that gave me the spark that I wanted to go into,” Frederick said.

After Frederick graduated from Calhoun High School, he moved on to attend college in Victoria and then transferred to Corpus Christi State University, now Texas A&M University-Corpus Christi.

Frederick went on to receive a bachelor’s and master’s degree from CCSU. During his years there, he came across the path of taking a psychology course at Del Mar College and little did he know he would later become a Del Mar College professor.

Before being hired at Del Mar, Frederick was involved in other jobs in and around the area of Corpus Christi.

Right out of graduate school, Frederick worked one year at Harbor Playhouse doing technical direction. He then moved on to teach technical theater at Gregory-Portland High School for four years.

In 1988, Frederick received a phone call from Sue Finley, who had been running the theater program at Del Mar College on her own for years.

“She called me and said, ‘There’s a job opening, are you interested?’ and my lifelong goal had been to teach at a college so I got all my information in and this job was placed in front of me,” Frederick said.

The pair would go on to teach alongside each other for about six years until Finley’s retirement in 1995.

“I had known Sue since my college days, she used to direct shows and choreograph shows over at CCSU,” Frederick said.

In that same year, Carl Yowell came on board to teach alongside Frederick.

“We’ve grown from just two faculty to five, have become accredited by the National Association of Schools of Theatre, and expanded our facilities under his leadership.” Yowell said of Frederick. “Every programmatic accomplishment has his fingertip on it somewhere.”

Yowell and Frederick crossed paths when they were students at CCSU and took part in the production of “A Midsummer Night’s Dream” in 1981. Even after embarking on different journeys thereafter, the two would later end up teaching together at Del Mar.

“It continues to be a blast working with a longtime friend,” Yowell said. “He’s a great colleague, students love him, he is a visionary strategic administrator, but he’s still the same Kim I became friends with over 35 years ago.”

Though Frederick loves what he does, over the years it began to take a toll.

For years Frederick was involved in various community organizations such as participating on the Board of Directors for Corpus Christi’s Harbor Playhouse and The Corpus Christi Arts and Cultural Commission. In 2008, Frederick drew back from being highly active.

“It was getting real stressful and then I had a heart attack,” Frederick said, “so I remember being at home recuperating.”

“It’s time consuming, it’s exhausting because most people don’t understand we’re here all day doing classes and then we turn around and stick around for rehearsals from 7 to 10.” Frederick said. “Most evenings we trade off directing so you get a little break, and the technical guys do just as much work.”

Former student and now a librarian at Del Mar College, Lisa Muilenburg agrees that it takes hard work to be a part of the theater world but admires Frederick for his work ethic.

“I think he’s one of the reasons the theater program does so well. He works really hard for Del Mar College, he’s done a lot of time here and a lot for us,” Muilenburg said. “He inspired a lot of the people.”

Despite the burnout the students and directors face, Frederick feels the reward from a production makes the journey worth it.

Frederick has been involved with more than150 shows at Del Mar College. He is currently producing “Androcles & the Lion” with a cast of six, which will showcase this spring.

“We get caught up in life about the destination, and my passion lies in getting the students to move in a positive direction,” Frederick said. “We’re not talking just about theater-wise, this is as human beings.”