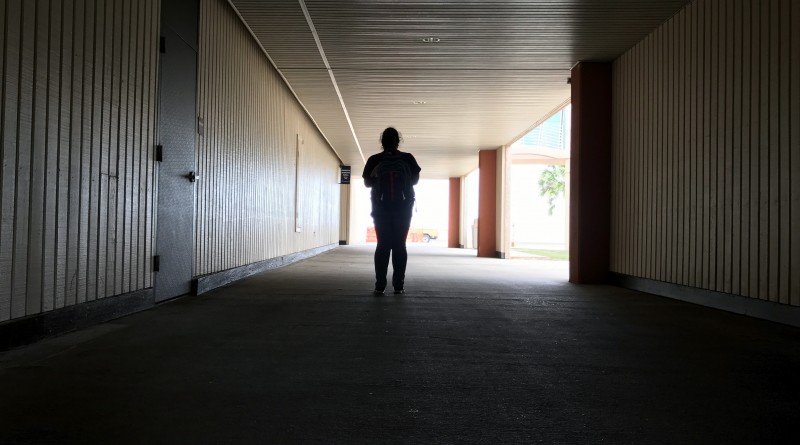 For one former Del Mar College student, the outcome of November’s presidential election left her scared for her family’s future.

“To be honest I cried the entire night,” said Katia, who has asked that her last name not be revealed.

The Austin native was brought into the world in 1996 a U.S. citizen, cared for and loved by her hardworking immigrant parents.

According to the Pew Hispanic Research Center, 24 percent of U.S. babies have immigrant parents.

Two years before she was born, Katia’s father left Mexico to seek a better opportunity here in the United States. In 1995, Katia’s mom joined her husband and they made their home in Central Texas.

“My dad is the source of income as a construction worker, while my mom is a stay-at-home mom,” Katia said. “She goes out to do the errands and grocery shopping so while she’s out and about, I worry about her more now than ever.”

Katia is now majoring in pre-nursing at Texas A&M University-Corpus Christi and is focusing more on finishing school as soon as possible due to the recent deportation raid threats happening in her hometown.

“I’m a bit more conscious on how I spend my money right now and just a bit more stressed to finish school,” Katia said.

Del Mar College political science professor Renato Ramirez said the U.S. has a long history of profiling based on religion and ethnicity.

“We go through time periods in which people are scapegoated based on religion, based on nationality, based on their immigration status,” Ramirez said. “We’re seeing this again, we saw it in the ‘50s, in the ‘30s, we saw it at the turn of the century, we saw it many different times throughout our history.”

“We’ve had periods of mass deportation before. President Obama deported more people than any other president prior to his terms in office and Donald Trump I think is going to continue that pattern,” Ramirez said. “It creates a fear, even for nonimmigrants that are minority of Hispanic background.”

For students like Katia, living fearfully can cause one to question if their education is worth the risk.

“That the government is keeping an eye on you is debilitating. You can’t focus your attention on what you need to do, and you start to wonder, ‘Is it worth it?’ Why should I dedicate myself to this society if they are going to treat my parents like pariahs?” Ramirez said. “It creates a tremendous amount of uncertainty in your ability to succeed.”

Aside from living in Austin her whole life, moving to Corpus Christi was a part of Katia’s educational plan with the intention of participating in the nursing program at A&M-CC.

After living in Corpus Christi for a little over two years now, Katia has created a habit of keeping up with the news around the world. Little did she know, soon the news would affect her personally.

After Trump won the presidency against Hillary Clinton, Katia knew her life was about to change.

There was much debate in the news of Trump building a border wall and enforcing new immigration policies.

“I’ve read articles that even under the Obama administration more people were going back rather than coming into the U.S.,” Katia said. “Building a wall would be just a waste of money that could actually benefit the U.S. in another area.”

Katia’s roommate Cory DeLeon has noticed a change in her behavior recently.

“I’ve seen her a lot more involved with the news whether it involves watching it or reading about it,” DeLeon said. “And I know she wanted to be home with her family because, of course, who wouldn’t worry for their family?”

As a college student living away from home, DeLeon grew closer to Katia and has much empathy for the difficulties she lives with.

Katia can’t help but wonder what would happen if her parents were deported from the United States, a place they have called home for over 21 years.

“I had to come up with different plans if anything were to happen to my parents,” Katia said. “If my dad were to be deported I would either have to go back to Austin and help my mom support the family or take out a loan and just finish my minor as a major and try to graduate here as soon as possible.”

As the oldest of three siblings, Katia has come up with different scenarios and possible outcomes to take over the responsibility of taking care of them.

“My other plans were that if my mom were to be deported I would have to go back to Austin because my dad wouldn’t be able to care of my siblings alone,” Katia said. “One thing that struck me was that my brother said that they would rather stay with me in the U.S. rather than going with them [parents] to Mexico. They’re so use to life here in the U.S. because that’s all they have ever known.”

Katia felt heartbroken when it came time to sit down and discuss her plans with her parents.

“There were a lot of tears,” Katia said. “I couldn’t wait to be home and had to call my mom with multiple plans.”

At least 5,100 children have had their parents deported since 2011, according to the Applied Research Center. The center warns that if nothing changes within the next five years, 15,000 more children are likely to face a similar fate.

“Family is everything to me,” Katia said. “They’re my support, my teachers, my strength in everything I do, and without them I’m not sure what I would do.”