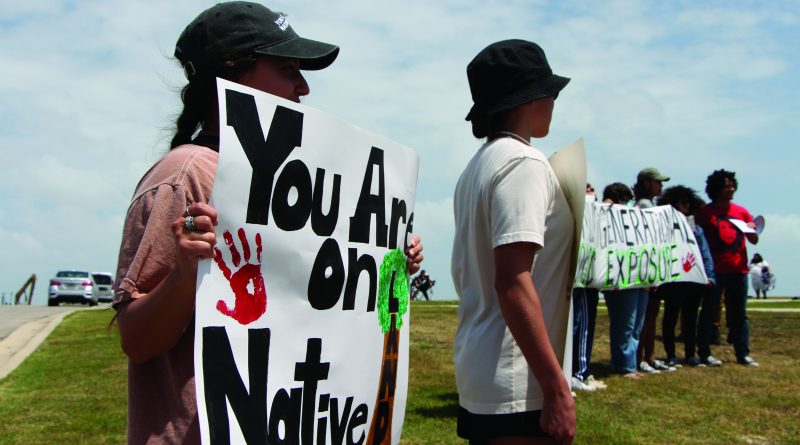 People from surrounding areas joined the Indigenous Peoples of the Coastal Bend at the ‘STOP ENBRIDGE’ protest on April 24.

Indigenous Peoples of the Coastal Bend and individuals from surrounding areas gathered on April 24 at Waters Edge Park to protest Enbridge, a Canadian petrochemicals and exports company.

Love Sanchez, co-founder of Indigenous Peoples of the Coastal Bend, spoke to about 40 peaceful protesters.

“It brings unity and solidarity being here,” Sanchez said.

Enbridge is the company that now owns land that once belonged to the Karankawa in Ingleside. It hopes to expand on the land.

The lawsuit against the petrochemical company is to protect the sacred land.

Enbridge proposed a plan to build a seawall pipeline along the coast that will meet Houston, and a new pier at the previous Karankawa settlement.

The organizers of the protest shared their concerns with the community and educated them on the land of their ancestors.

People stood with their signs, shouting, hoping to catch bystanders’ attention on the issue.