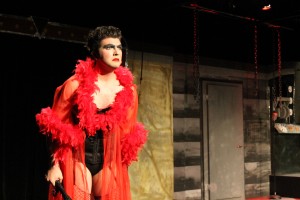 Audiences are shivering with antici…pation as the latest “Rocky Horror Show” hits the stage at Aurora Arts Theatre this fall. The cult classic is a humorous tribute to the science fiction and horror B movies of the late 1940s through to the early 1970s.

The musical tells the story of a newly engaged couple, Brad and Janet, getting caught in a storm and coming to the home of Dr. Frank-n-furter, a mad transvestite scientist who just happens to be unveiling his new creation, a muscle man named Rocky Horror, that very evening.

Rikki Davis, a 2007 Del Mar College graduate, called the show “a fun romp that all your friends can enjoy.” With a fantastic band, impeccable costumes and vocals for days, the cast of “Rocky Horror” is pulling out all the stops to put on a great show. Del Mar College student Chloe Swan said the rehearsal process was a lot of fun. “It got really stressful at the end, but it was a lot of fun and a lot of bonding time,” Swan said.

Collegiate High School graduate Eli Gonzalez is very excited to be playing the role of the butler, Riff Raff. “I usually play dads or boys or love interests so being a creepy butler was hard for me at first, but I think I got the hang of it now,” Gonzalez said. Monica Flores, who plays Janet Weiss, has done numerous shows at the Harbor Playhouse and auditioned for Rocky because she’s never done the show before. “This is my first show at Aurora so it’s definitely a different environment. I’ve always wanted to have the ‘Rocky’ experience. Plus, my girlfriend is the choreographer so I thought, why not.”

Del Mar College student Michael Jay Salinas plays the part of Brad Majors. Salinas said the most difficult thing about the role was getting comfortable being on stage in just his underwear. “It took me a little while to get completely comfortable, but I’m OK now,” he said.

Director Nicholas Sheffield submitted his proposal to direct the show back in July. “I was very blessed to be chosen,” he said. “My vision for the show was a return back to the 1950s aspect of it.”

Sheffield said that when he was casting the show he was looking for strong vocalists. “Vocals are first and foremost the most important thing to me, so I picked very strong singers and a strong ensemble,” he said.

With the elements of an excellent score, dancing and acting, the product they’ve created is something he is proud of. Sheffield approached Karin Bourie to choreograph the dance-heavy musical and she was thrilled. “I felt honored because we had done ‘Rocky’ before as castmates,” Bourie said.

Bourie is also in the show, playing one of the five Freaks. “It felt weird going back and forth dancing with the cast, then not dancing with them and taking notes,” Bourie said. “It was challenging, but I think it came together well.”

Sheffield would like to invite everyone to come see the show because it’s something he wants everyone to experience. “It’s not just watching a show. It’s getting to yell at people on stage, cut up and have a blast,” Sheffield said. “And then of course the whole concept of ‘Don’t Dream It, Be It.’ ”

Visit the Aurora Arts Theatre through Nov. 1 and give yourself over to absolute pleasure. Check out AuroraArtsTheatre.com for show times and ticket information.