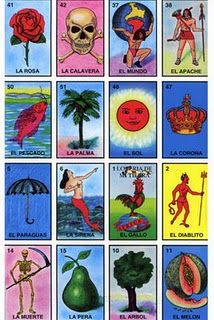 Downtown Corpus Christi got a new artist touch to celebrate Hispanic Heritage Month. K Space Contemporary revealed Phase I of its Loteria mural on Oct. 3 during a dedication ceremony at the ArtWalk. The mural was displayed on the south side of the Kress building at 619 Chaparral.

Some 114 artists completed the original 130 Loteria card re-creations in 2013. A panel of judges then selected 54 cards to be the re-creations for the mural. Phase I displays the first 24 and Phase II will display the last 30. The cards are 4 feet wide by 6 feet long, making the mural from Phase I 24 feet by 24 feet.

Gerald Lopez, who has taught art at Del Mar College, was one of the artists selected to paint the La Botella image for the mural. Lopez’s interpretation of this Loteria card is a bottle of hot sauce, instead of ketchup, and has smoke billowing out of the top.

“I wanted it to be like a volcano,” Lopez said.

Loteria, or Mexican Bingo, is known for its colorful picture-filled playing cards. According to 2009 Community Art Magazine Design winner, Teresa Villegas, Loteria-style bingo differs from the American version because when each card is called out they can’t say B-12, so they use poetic verses like “the coat for the poor” to imply the sun card. Often kernels or beans are used as markers until the designated bingo is achieved. The original version was used in church to help teach the differences between holy objects and to help with reading skills.

“The linking of images to social commentary has existed since the inception of the game,” Villegas said.

The most recognized version is the “Don Clemente Gallo” version, which was introduced in Mexico in 1887 and comes with 54 cards. This is the version K Space used as a basis for the re-creations.

“I think the re-creations are a wonderful interpretation of the originals with a slight modern twist,” said Dennis Aligno, a local resident.

Grants for the permanent display came from the Corpus Christi Parks & Recreation Department, the Arts & Cultural Commission and the National Endowment for the Arts. K Space also holds an annual fundraiser, Steampunk Wigout, which also helped fund Phase I.

For more information you can call K Space at 361-887-6834 or visit them at kspacecontemporary.org/public-art-projects/loteria-the-mural/.