With Spring Break more than likely breaking your bank, your gaming budget may be a little short for the next few weeks. That’s why downloadable games are a great option for anyone looking to spend less for more games.

Multiplayer titles are some of the most popular downloadable games and “Helldivers,” available for $19.99 on PlayStation 4, Playstation 3 and Playstation Vita, proves why. A four-player top-down shooter, “Helldivers,” from developer Arrowhead Games, plays like a hybrid of such classics as “SmashTV” and “Gauntlet” with a team based shooter.

Randomly generated missions take place on a variety of planets full of three different alien races to shoot and tasks one to four players to complete their objectives and call for extraction off planet. The simple, cartoonish 3D graphics help to bring the myriad swamp, desert and industrialized planets to life. Weapons and explosions generate a good deal of bass that goes along with a proud military score so that the sights and sounds help pull you into the experience. 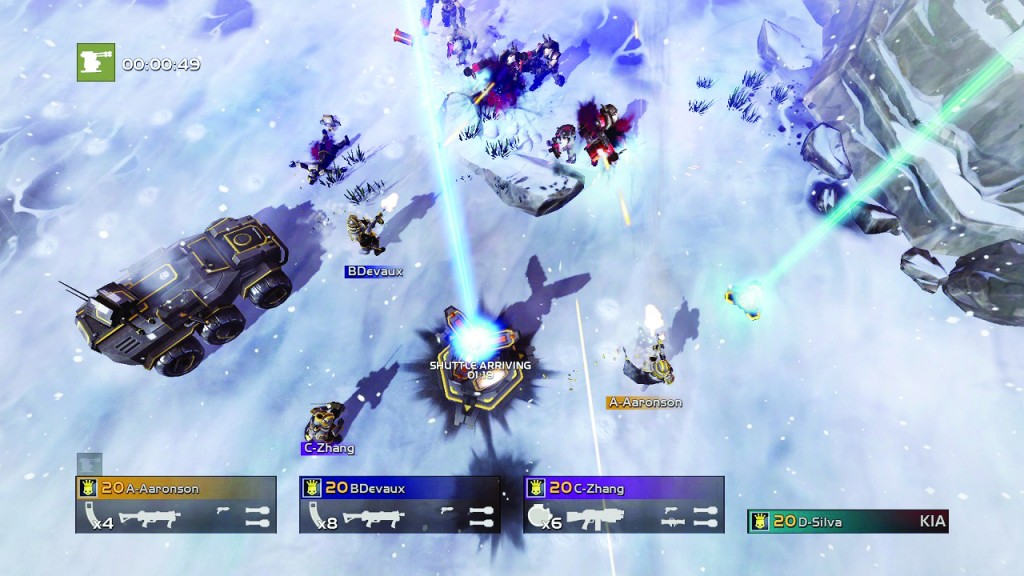 As the missions in “Helldivers” begin to get increasingly more complex, so do the enemy types and amount of enemies. Increase your odds of victory by teaming up with a few friends-just watch out for friendly fire.

The game begins simple enough with few enemies and obstacles to your complete missions and a small amount of equipment to start with. Stratagems are another part of your load out and are used to call in additional equipment, weapons, vehicles and support like bombing runs.

Completing missions with every objective completed, the least amount of casualties and all soldiers extracted will net the best experience and global score to an ongoing campaign that every player across the world contributes to. And with more planets conquered comes more stratagems and rewards that will keep you coming back. But as the missions begin to get increasingly more complex, so do the enemy types and amount of enemies you have to deal with, to a point where playing alone means instant death in the hardest missions.

If that weren’t enough, adding multiple players doesn’t technically make matters any easier, either. You will have to consider friendly fire, placement of supply drops and the load out of your fellow teammates, as their weaponry can be just as dangerous to you as your enemies. Heck, if you’re not careful about where you are when your dropship lands to pick you up, you might end up as a wet spot underneath its hull. While players can call in a stratagem to bring their dead friends back to the battlefield, the ability is set to a cool down, so you can’t simply bring them back over and over.

What that amounts to is a game that relies heavily on communication and teamwork with tons of chaotic fun. Sure you may have just killed your buddy with a misplaced turret but, chances are you’ll be laughing about it days later as you relate your tales of victory and defeat. “Helldivers” also supports cross-buy and cross-play where owners of any version of the game will have access to the others so if you bought it for consoles, your handheld Sony Vita will also be able to play it with no extra purchase. Add that with the fact that any version can play with any other and you have a never-ending cadre of teammates online waiting to yell at you for your stupid mistakes.

If you like your games challenging and have three other friends willing to take the fight to those pesky aliens, then jump in your drop pod and take the dive.