The lights come up on the stage, the crowd roars, the cast enters and the show begins.

Bringing audiences feelings of excitement with a dash of uneasiness year after year, the Aurora Arts Theatre presents “The Rocky Horror Show” this fall.

This is the Aurora Arts Theatre’s sixth year putting on the cult classic for the community.

“The Rocky Horror Show” follows a young couple on their way to visit an old college professor. They run into a bit of trouble when they get a flat tire during a storm and seek shelter at a mansion they spotted down the road. What they don’t know is the mansion’s tenants are alien transsexuals from the planet Transylvania, and their master, Dr. Frank N. Furter, is about to reveal his latest, outrageous experiment. 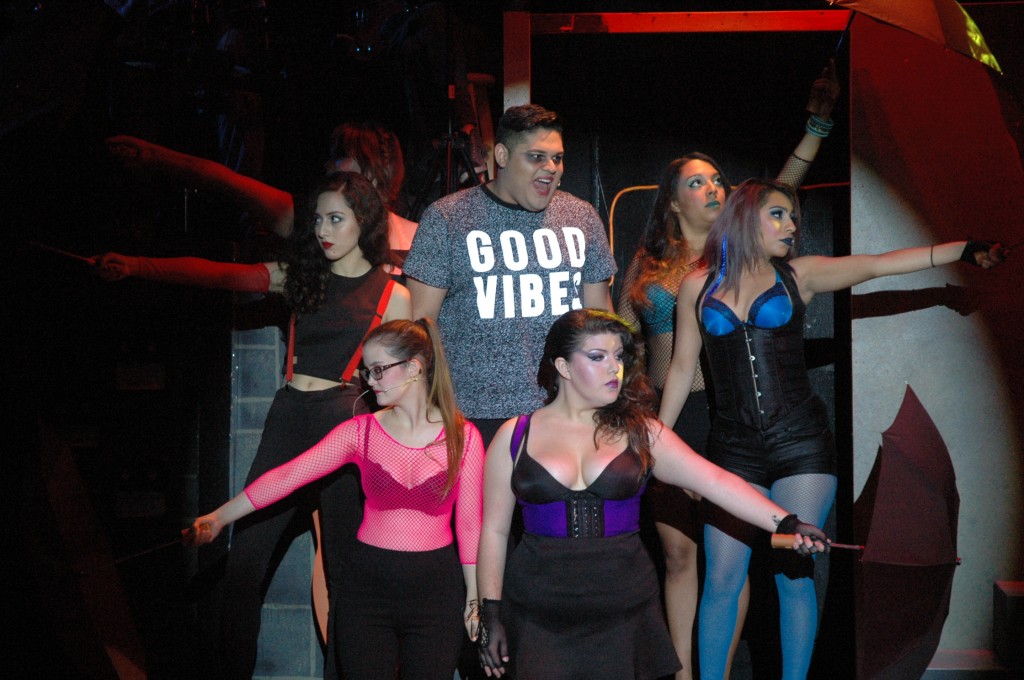 Frank Reyna (middle), surrounded by the phantoms, belts his solo during a recent performance.

“This is my first show at Aurora and the first time I’ve ever been in Rocky,” Kristin Hays said. “I was super excited when I was cast as a phantom, and I thought that MJ’s vision for the show was really fun.”

Salinas is eager for everyone to see his vision come to fruition on stage.

“As the director, I’m excited to see everyone’s reactions to the minor changes we made,” Salinas said.

“I like to do a play a year, so that’s what made me want to audition,” Perez said.

Getting cast with the part he auditioned for, Eddie/Dr. Scott, has made this experience that much sweeter for Perez. “I love theater. It’s a passion and you can’t put a price on doing something that you love.”

“Being half-naked in front of a lot of people is a little bit different from what I’ve done before,” Stubbins said. “The professors in the Del Mar drama department, especially Carl Yowell, helped me a lot to get me out of my comfort zone, and that was an amazing stepping stone for this.”

The production team had to step up their game this year when things got a little bumpy and they lost one of their leads.

“This year was a little hard because we lost our Brad so I had to step in for the role and still direct the show,” Salinas said. “Our choreographer, Anna Martinez, and vocal director, Eli Gonzlez, really stepped it up. We all came together and worked really hard to make this show exactly what we wanted it to be.”

Visit the Aurora Arts Theatre through Oct. 31 and witness the spectacle that is the Rocky Horror Show for yourself. Check out AuroraArtsTheatre.com or call 851-9700 for show times and ticket information.