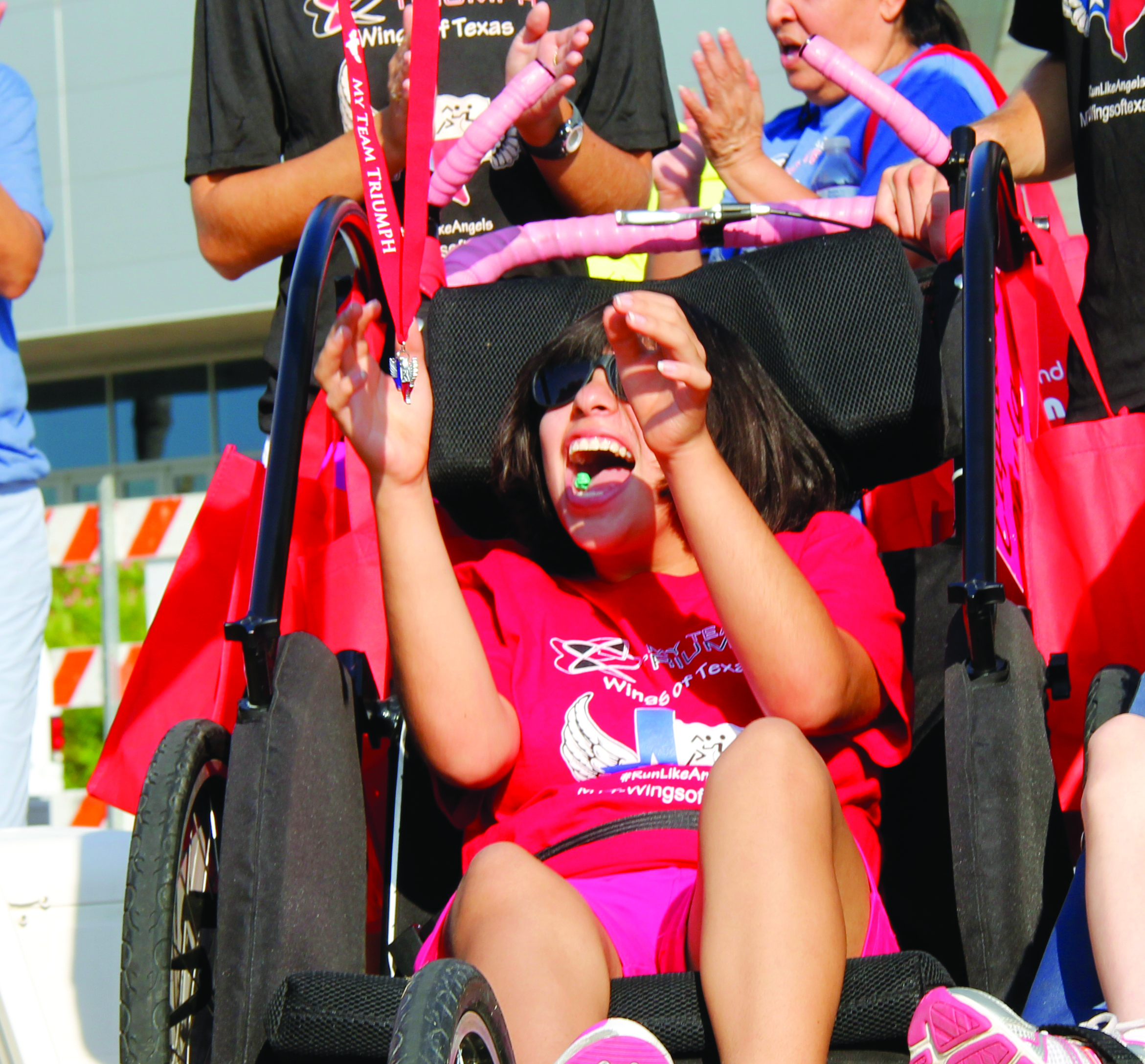 Not all angels have wings, so Michelle Jones, the founder and president of MyTeam Triumph: Wings of Texas, provided her son, Charlie, the wings he needed.

“My son has cerebral palsy. He’s 17 years old,” Jones said. “My husband and I decided it was time to get healthy. … We went to Austin to participate in the Biggest Loser run, and my husband pushed our son in his wheelchair.”

At the run, Jones met MyTeam Triumph: Ainsley’s Angels of South East Texas, who ran while pushing people with disabilities in their wheelchairs. Upon returning to Corpus Christi, Jones decided to start the South Texas Chapter of MTT, called Wings of Texas. The chapter started with Captain Charlie and two wheelchairs in April 2014.

“Community members (angels) run with captains. The more we go to races, the more runners we find who appreciate the concept,” Jones said. “It’s amazing how people stop what they’re doing and just watch and cheer. We have names on license plates on their chairs, so people cheer for them as they go by.”

Wings of Texas has grown to 54 captains and 218 angels. Some chairs are sponsored by places like Bay Area Bikes, and others are paid for by the families, who sometimes opt for unique customizations such as a special color to personalize the captain’s bike.

The majority of the angels are volunteers, but they don’t just run. According to Jones, anyone who wants to volunteer can cheer for the captains during races if they don’t want to run and those who don’t want to race are welcome to only come to the free 5K training runs.

Some athletes train for longer-distance races, and others train for triathlons. The triathlon team meets every other week at a pool and Lake Mathis to train for Conquer the Coast. According to Jones, the front wheel of their specialized wheelchairs comes off for the bike attachment, and the swimming-leg captain sits in a raft, which ties to the waist of an angel.

Wings of Texas also has participated in a 200-mile relay, which took 31 hours to finish.

“You just have to want to be part of this because the rest kind of falls into place,” said Race and Training Coordinator Shannon Hathaway, who is training to become a physical therapy assistant at Del Mar College. “I work for the school district, and Michelle’s son is one of my students. … When she told me about (Wings of Texas), it was a no-brainer. This helped me fall in love with running all over again.”

Hathaway seeks races based on her own experience or recommendations, and she contacts them and explains the purpose of Wings of Texas. According to Hathaway, everyone wants the group at their race; the community has opened up.

After every race, all captains receive medals made special for them. It shows them they finished and gives them a reminder and trophy. The captains aren’t the only ones receiving a prize, however.

“Our angels say so all the time. They say, ‘It gives me a purpose. I’m not just going out wasting the day running. I have a reason to,’” Jones said.

Wings of Texas tries to get its captains out at least once a month, aside from races. In their August training run, all the captains brought school supplies for a back-to-school theme, and some wore spirit shirts from their school. October will follow an ’80s theme. According to Jones, the themes are meant to make everything more fun.

Irene Davis, one of many parents who found Wings of Texas, signed up her daughter, JaiMarie, for the team.

“They enjoy being pushed and being included. They enjoy feeling like they’re part of this race. That’s the main reason why I got my daughter involved,” Davis said. “She told me, ‘It was fun, Mom. I never felt could run this fast,’ but she’s not running, she’s sitting, but she just loves it so much.”

According to Davis, when she moved with her family to Las Vegas, she tried introducing JaiMarie to another running group. JaiMarie continued to miss her friends and everyone in her old team, so the family returned to Corpus Christi and Wings of Texas.

For those who want to get involved, the website provides applications for both angels and captains. There is a criminal background check for all angels but after the application process, the race coordinator sends weekly emails seeking angels for designated captains.

“They keep you going,” Jones said. “I’m not a runner by any means. When I go training and (Charlie) isn’t with me, it’s so much harder to get my miles in. They make it a lot easier.”

For more information or to apply as an angel or captain, visit www.mtt-wingsoftexas.org.