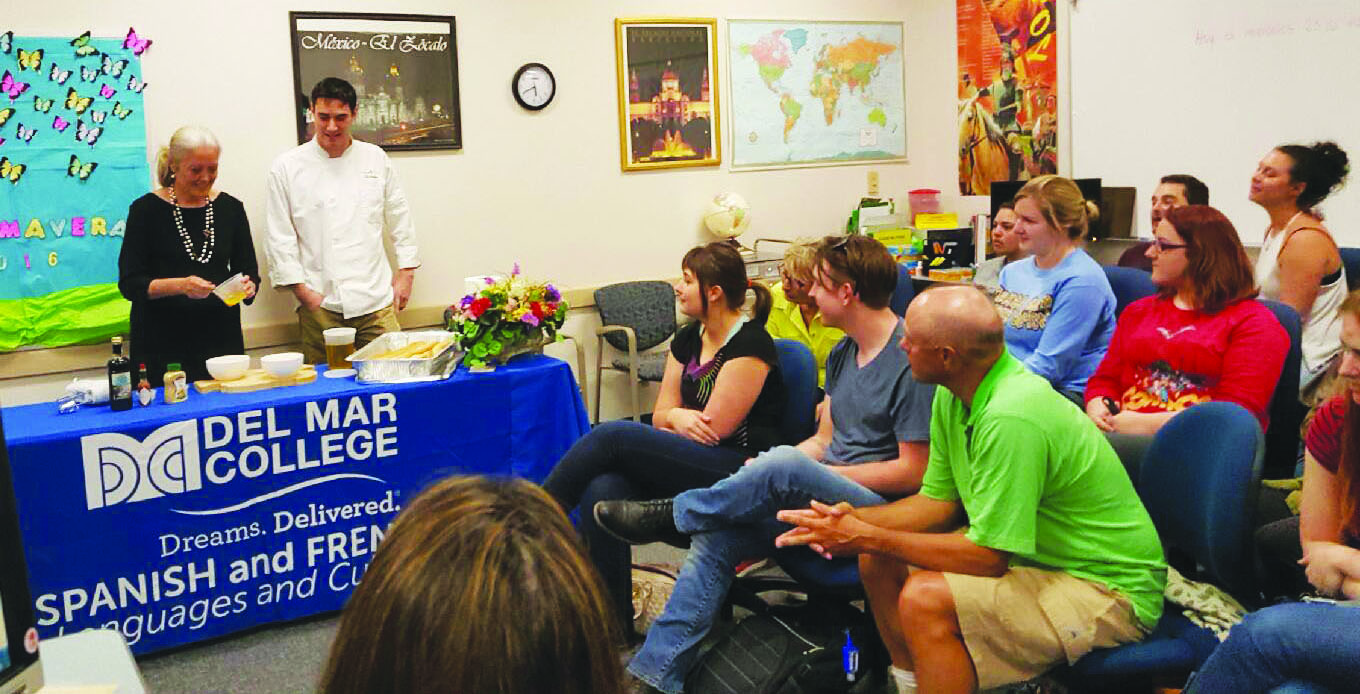 There are more than 220 million French speakers worldwide and the select few at Del Mar College honored the gastronomy of the French-speaking countries by celebrating Fête de la francophonie on March 23 in the Foreign Languages Lab inside the Coles Building on East Campus.

Del Mar College’s French program celebrated the holiday by inviting Sophie Garnier, owner of BonnA-Petit, and her son Christopher Garnier to show students how to make delicious French cuisines. Some students brought their own homemade cuisines like ratatouille.

Sophie Garnier, owner of BonnA-Petit, and her son Christopher Garnier demonstrate to students how to make their own homemade mayonaise on March 23 in the Foreign Languages Lab.

“We taught students how to make homemade mayonnaise, Garnier said. “We wanted to come and help and share the love and culture of France.”

Garnier was born in Paris, France and grew up with the French culture. She came to Corpus Christi to share the amazing culinary pleasures France has to offer.

“My son is a student at Del Mar College pursuing in the surgical technician program,” she said. “I thought what a great day to share our culture together for all his peers.”

“I’m fortunate and grateful to have grown with the French culture my whole life,” he said. “I think what Del Mar College’s French program is doing is a wonderful opportunity for other students to grasp and understanding of the French arts.”

Javier Morin, associate professor of Spanish, explained how important it was that the French program hosted the event.

“We wanted to help celebrate the importance of the French culture, but we also wanted to let Del Mar know that we have a French program since it has been so long since we have had one,” Morin said.

According to Morin, Del Mar College was without a French program for two years until this past fall semester.

Chloe Swan Rybalka is a French II student in the program at Del Mar College. She described how wonderful the Del Mar College French program’s Fête de la francophonie was to students.

“I think people need to utilize the opportunities a lot more and understand that what the French program is doing is giving us an opportunity to learn a new language.”

Rybalka’s love for French goes beyond that of a usual student. She doesn’t just want to learn the language for her future career as a detective, but to also get in sync with her French roots.

“Learning French has helped me become closer to my family who lives in France. My father grew up in a small town called St. Jean de Luz. The town is located in the south of France right near the Spanish border near the Basques. Some of my relatives don’t speak English, so to finally speak French back to them is awesome.”