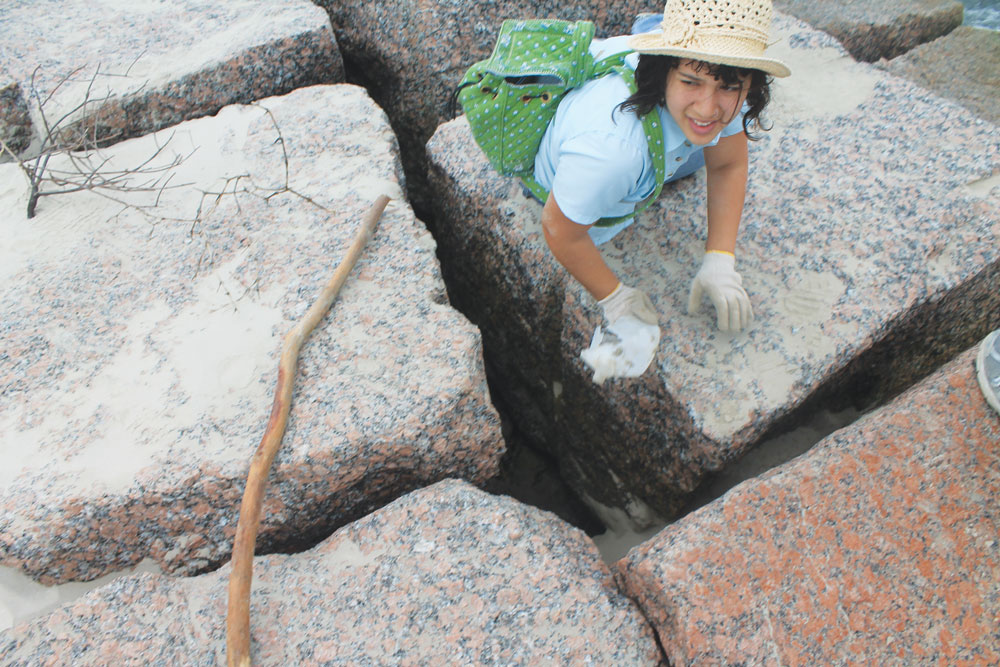 One of the most popular destinations to visit during Spring Break is the Padre Island National Seashore. Nationally recognized for its beauty and diverse ecosystems, the park is the longest stretch of undeveloped barrier island in the world.

The Seashore is home to a vast array of species, including both land and marine animals. Thousands of fish, mammals, plants and other life forms thrive in its multiple habitats. Some animals even depend on the Seashore for survival, as they are now facing possible extinction as a result of human impact.

Melissa Zamora participates in a recent beach cleanup to remove the litter left behind by Spring Breakers.

Included in this group of potentially extinct animals are five of the seven known sea turtle species, which are all federally listed as either endangered or threatened. Because the Seashore is the only location in Texas where nests from all five of these species have been found, it is important that steps are taken to protect their lives and their home.

The main issue facing the Seashore’s environment is trash, which washes onto the beaches from off shore or is carried onto the beach by the wind.

“Unfortunately there’s trash in the water, which can be a threat to the turtles, birds and even small mammals,” said William Botts, the park’s education coordinator.

Much of the trash is either plastic or styrofoam, but also includes cigarette butts, cans and lighters. Fishing gear, such as lines and nets, also pose a threat to sea life.

According to the Environmental Protection Agency, plastics represent between 60 and 70 percent of the total marine debris found in the world’s oceans. Plastic bags are extremely dangerous to marine life, as some animals often mistake them as prey. When ingested, these bags cause internal blockage, resulting in the death of the animals.

“We’ve found turtles that died from choking on plastics, and ones that got entangled in nets,” Botts said. “Many creatures are killed by the debris in the Gulf.”

To combat the issue of trash at the Seashore, the park relies on volunteers to help at their beach cleanups. The most recent cleanup event removed approximately 50 tons of garbage from the Seashore. However, because littering and improper trash disposal are still issues throughout the Texas coast, trash continues to wash up on the beach.

According to Botts, the amount of trash at the Seashore increases during Spring Break. Visitors often fail to properly dispose of their trash, choosing instead to leave it on the beach. This waste then accumulates along the shore.

To preserve and protect the Seashore, visitors need to be more mindful of their trash. They can also participate in the beach cleanups, which are held regularly. The next Adopt-A-Beach clean up will be in April.

“It really comes down to the individual visitors to decide to quit littering and to clean up,” Botts said.

So if you’re planning to visit the Padre Island National Seashore during Spring Break, be sure to follow all of the rules and regulation set by the park, including proper disposal of all trash.

For more information about the Seashore, call the park information office at 361-949-8068.