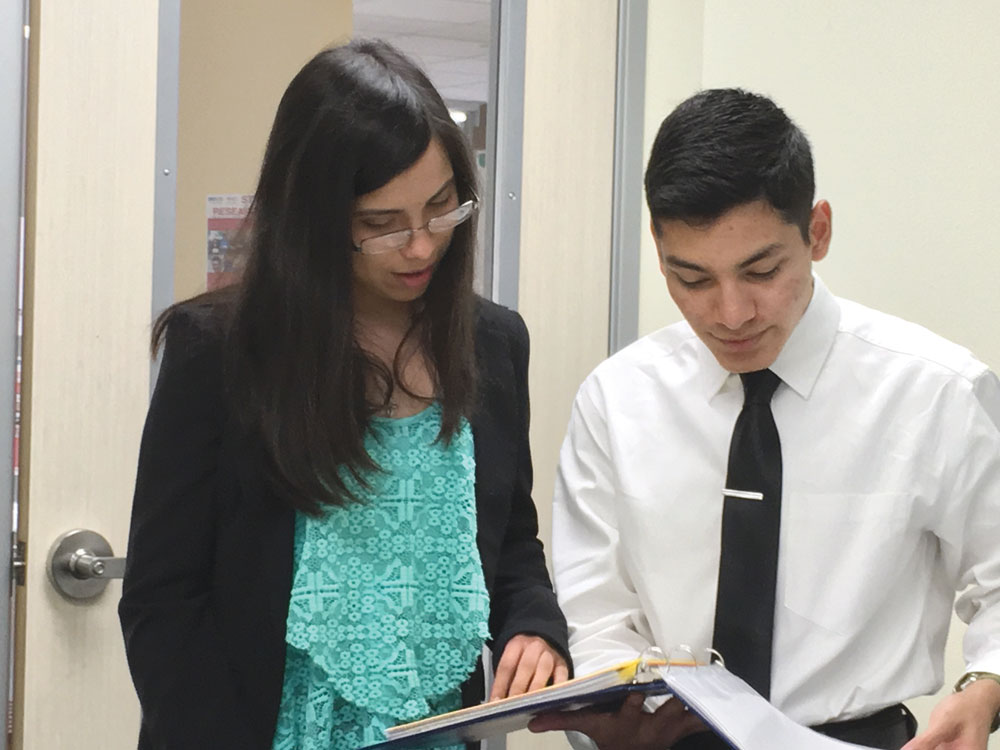 When Marissa Gonzalez was 6 years old, she attended her eldest brother’s graduation at Moody High School. After hearing an empowering speech delivered by the class valedictorian, Marissa knew she would one day hold that position. On that day, Marissa made it her goal to graduate at the top of her class. On May 21, she will complete that goal as she graduates as the valedictorian of Collegiate High School’s Class of 2016.

Marissa’s success is no surprise, as she has always been an exemplary student. When she was young, she strived to make her parents proud by excelling in her academics.

“I always worked hard — mainly for them,” Marissa said.

Marissa’s parents are immigrants from Mexico. After hearing of their hardships, including their inability to pursue education beyond elementary school, Marissa knew she wanted to give meaning to their decision to move to the United States.

“I wanted them to see that I was succeeding because of all the sacrifices they made for me and my siblings,” Marissa said. “Me doing good in school is my way to give something back to them. It’s the only way to really pay them back for everything they’ve done.”

Marissa is the youngest of six children. Her oldest siblings stood as her role models, as their achievements were an incentive for Marissa to succeed. They experienced success both during and after their time in school, and were able to guide Marissa through her journey.

Marissa is also a twin. Her twin Melissa supported her through her achievements and encouraged her to stay focused on her goals.

“She always talked about how she wanted to be number one in her class,” Melissa said. “Ever since we were little, she was always really smart. I could tell that she would end up being number one.”

Although Marissa is proud of her achievements, she is aware of all that she had to give up to make them a reality.

“I’d look at my sister’s life and see how social she was and how she was going out all the time. It really made me see how much I was different,” Marissa said. “I couldn’t go out with my friends since I always felt the need to do something more related to school. I wanted to make sure I didn’t start to fail in my academics, so I didn’t allow myself to have fun, or to do other things that I wanted to do.”

Despite her sacrifices, which include both social opportunities and a traditional high school experience, Marissa understands the significance behind her pursuits and realizes the need for such losses.

“I wanted them to see that I was succeeding because of all the sacrifices they made for me and my siblings.” — Marissa Gonzalez, Collegiate High School Valedictorian

Even though Marissa’s academics always took priority, she was still able to establish and maintain lasting friendships during her time at CHS. These friends, who also aimed for academic success, provided Marissa with a small community of likeminded individuals in which she could thrive confidently.

“She’s made a lot more friends,” Melissa said. “Because of how smart she is, she became friends with the smarter kids. They study with her and keep her focused.”

Marissa’s friends fueled her motivation, as she fed off their strengths and attributes. Also, they became a welcomed distraction from the rigorous course-work that she endured. “They really helped me clear my mind,” Marissa said. “If I had just focused on nothing but school, I wouldn’t be where I am today. I would’ve given up somewhere and would not have cared anymore.” While at CHS, Marissa also took an interest in extracurricular opportunities including Academic Decathlon, Student Council and the Optimist Club. She also completed an internship at Menger Elementary School and volunteered at The Cattery Cat Shelter. Through these activities, Marissa experienced significant transformations. “She’s more open to taking risks,” said Chris Mendez, Marissa’s boyfriend.

“She’s become a lot more expressive of herself, and a lot more confident.” Marissa will be attending Texas A&M this fall where she will study zoology. Her goal is to open her own animal clinic with a mobile unit. Marissa also hopes to make a significant impact on the world through mission work and community service, especially in the lives of children. “I know that one day after school is done, I might become someone, specifically in the field of veterinary medicine. But I want to do more than that,” Marissa said. “I want to do something where I can look back and say that I made a difference in someone else’s life.”