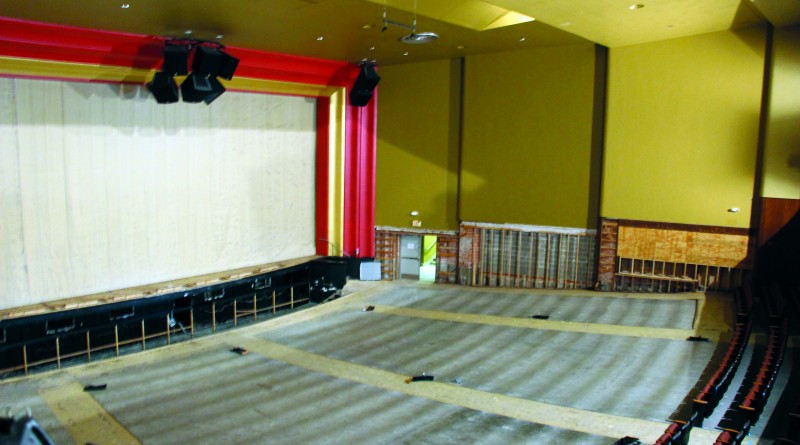 It’s been more that three months since the Richardson Performance Hall suffered severe damage from heavy rains back in May, and on Aug. 30 Del Mar College opened its doors to the media to show the current condition of the building’s renovation.

“When we first saw the damage the following Monday we were able to watch on the security cameras exactly what happened in that overnight timeframe,” said Bill Wilson, vice president/principal of WKMC architects as well as the coordinating architect for Del Mar College.

The hall has withstood numerous hurricanes and tropical storms in its 65-year history, but this is the first time it has ever flooded.                    – Bill Wilson

The heavy rains dropped an estimated 13-plus inches on Del Mar College’s East Campus during a short timeframe overnight May 15-16 ,which resulted in the flooding of the hall. Since then, the college has forced the closure of the facility until restorations can be completed. 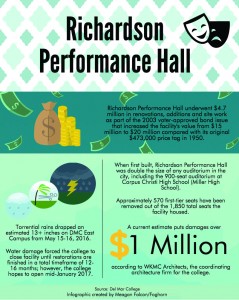 Repairs have been ongoing and a lot of the seating has been removed as well as the removal of all the carpeting, damaged Masonite wood paneling flooring on stage, and the damaged Mahogany wall paneling during the first few days of restoration.

“The hall has withstood numerous hurricanes and tropical storms in its 65-year history, but this is the first time it has ever flooded,” said Wilson.

To ensure that nothing like this ever happens again, the college has decided to reshape the ground underneath the hall to reroute water as well as reshaping the ground outside and replace the parking lot between the Richardson Hall and Memorial Classroom building.

“They are going to be new closures around the building and (students) will be seeing quite a bit of excavation around the Richardson in the next three to four months,” said Wilson.

More improvements will take place at the hall as industry experts evaluate different aspects of the damage, but as far as the college knows they hope to have the hall back and running mid January. The estimated costs of the repairs could cost over $1 million.

Any events scheduled this semester at the Richardson have been moved. If you have any questions about certain scheduled events, contact Shaun Meredith, manager, Richardson Performance Hall via email smeredith@delmar.edu or at 698-2228.