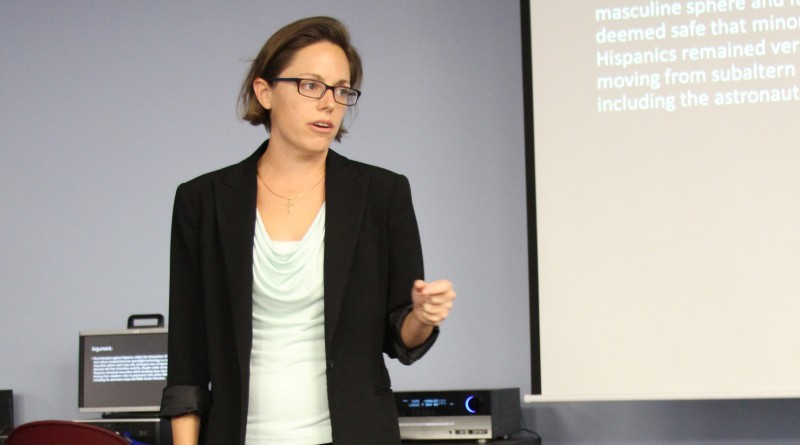 Students learn of discrimination within the walls of NASA

Del Mar College history professor Erinn McComb gave a presentation Oct. 11 in the White Library focusing on Hispanics’ rise to the stars as well as the hardships they’ve had to face over the years.

Many Del Mar students tuned in to listen to McComb’s hourlong presentation titled “Tacos in Space.” McComb began by mentioning the discrimination against Hispanics during the Cold War era, a time of great technological space advancements, and how masculine white men dominated the field. McComb took this moment to mention the gender roles heavily present during this time, adding pressure upon Hispanic women interested in space innovations especially.

Among the main talking points of the presentation was popular comedian Bill Dana, who often appeared on the “Ed Sullivan Show” during the 1960s as a heavily accented, dim-witted Bolivian astronaut named Jose Jimenez. This gave Hispanics a bad representation as technological users and helped enforce stereotypes, keeping them out of space exploration.

McComb noted that it wasn’t until after space travel was deemed safe that minorities were able to become involved in space innovations. The first Hispanic American astronaut, Franklin Chang Diaz, said in a space call with the president of Costa Rica after being asked what they ate in space, “We brought along tortillas, so we are making tacos this time in space,” coining the title of McComb’s presentation.

McComb made it clear that it’s no secret that Hispanics have had to jump through hoops to get where they are in the world of space exploration. Today the number of Hispanic astronauts stands at 11. One in particular is Ellen Ochoa, who is the head of the Johnson Space Center in Houston and has logged in over 1,000 hours in space. Both Diaz and Ochoa are perfect examples of the many Hispanics who broke down barriers and racial stereotypes to become a part of NASA’s top elites.