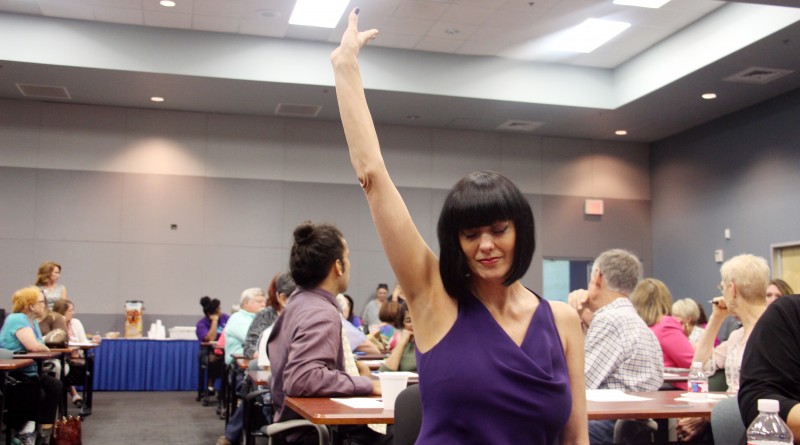 The room was silent and all eyes were on Danna Damore as she held back tears listening to an audience member recount her court case, which happened early Oct. 4, to a large audience at the town hall meeting at Del Mar College’s Center for Economic Development. Her assailant asked for the judge to remove his GPS bracelet because of his positive progress in a Batterers Intervention and Prevention Program, but Damore pleaded with the judge, “If you take off his bracelet, I will be dead.” The judge acted in Damore’s favor and did not allow her assailant to have his monitor removed.

Victims such as Damore and concerned citizens gathered at the town hall meeting the evening of Oct. 4 in hopes to get proposed legislation for the 85th Texas Legislative Session that begins Jan. 10.

“It is appalling that both these issues are in Texas,” state Rep. Todd Hunter said of domestic violence and human trafficking. “I’ve heard enough press conferences, enough talking around the U.S. and I haven’t seen anybody step up. Let’s get moving on it! It is time to step up!”

“We are so afraid of things that scare us that we do not act …until we stop being afraid we cannot act.” -Danna Damore, domestic violence victim

The forum filled the room where nearly 200 gathered to share a support to move legislation immediately and stop the violence.“This impacts everybody directly and indirectly,” Hunter said. “Everybody here is motivated to make a difference for change … this is not my legislation or Abel Herrero’s legislation. The best laws come from you.”

Hunter’s office held the town hall meeting and invited a panel for domestic violence issues and human trafficking issues. The panelists addressed each issue and the audience was able to ask questions on why there is not enough clarification in certain legislation and what needs to be done.

One panelist, Frances Wilson, CEO/president of the Women’s Shelter of South Texas, answered an audience member’s question on what people should look for when identifying domestic violence.

“A batterer doesn’t walk around with a big ‘B’ on the forehead all the time,” Wilson said. “(They) can be the person sitting next to you in church or a co-worker … they can be very normal regular folk that you see all the time, but it is with the victim or their family that they could be aggressive.”

Damore expressed her opinions openly in front of a large audience, asking the community to better educate themselves on what violence is and what it really means to be a victim of violent crime.

“We are so afraid of things that scare us that we do not act,” Damore said. “Until we stop being afraid we cannot act.”

Each individual in the room had something to say and many were individuals who were employees of the judicial system. CCPD Detective Mike Isla had some important words for the community.

“Be a good witness. If you see unusual activity don’t be afraid to report it. Good witnesses who are very observant help make a difference,” Isla said.