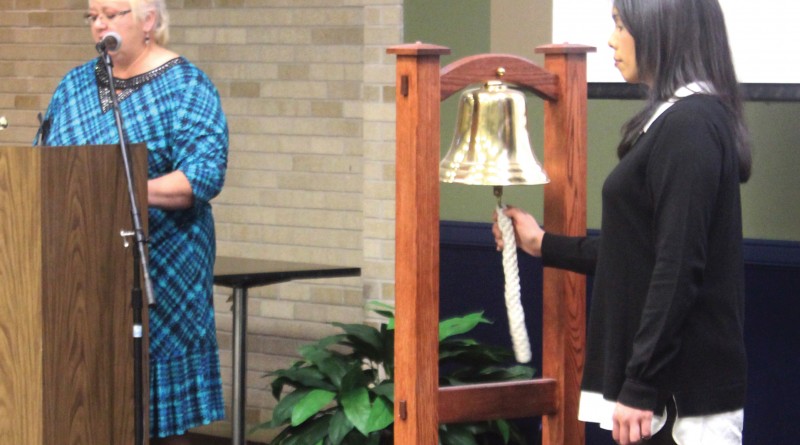 The tolling of a bell could be heard throughout the Harvin Center as Del Mar College honored the sacrifice of 1,800 fallen veterans on Nov. 10. Veterans, students and staff gathered in the Retama Room to participate in and watch the name reading ceremony, which involved reading off a list of names of fallen veterans from around the Coastal Bend area and ringing a bell for each name.

“It’s important that we take the time to honor their sacrifice and their legacy,” said Tammy Micallef, director of Veterans Services. “Every man and woman whose name was read paid the ultimate sacrifice. It’s important to pay homage and remember the sacrifice they made.”

Along the side of the ceremony, a row of staff was seated, all veterans but one, ready to step up and take their turn ringing the large bell or recite a section of the names.

The ceremony was one of many events that Veterans Services held in honor of Veterans Day. The events gave students a way to honor family members and friends who may have served in the military.

“I appreciate my grandpa’s service,” student Kimberly Garcia said after recounting her thankfulness for those who have served. “I think he’s very brave to fight in the war especially at such a young age. Many years later he still struggles with his past.”

This was the fifth time Del Mar has done the name reading ceremony, continuing the growing tradition meant to bring awareness to the loss and service of the members of the military not only here at Del Mar, but in general.

“It’s a big sacrifice the people in the military make,” Micallef said, “made to ensure we have the way of life that we have.”