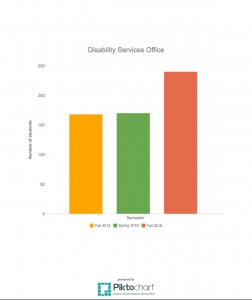 Jesus Romero knows that the best way to overcome a challenge is with help.

Romero, who has been registered with the Disability Services Office since his first semester at Del Mar College, was one of a record number of students who were accommodated last fall by the DSO.

Romero has taken advantage of services such as using a note-taker during class and using special testing accommodations. He values the services here and says he likes to take full advantage of everything the office has to offer.

“If I didn’t have any accommodations I would be really challenged,” Romero said. “I need it because there are some things that I can’t do very well.”

The DSO has helped countless students such as Romero by providing services such as someone to take notes during class.

Last semester the DSO accommodated 243 students, which was a 43 percent increase from the previous semester and the highest number of students ever accommodated.

Daniel Fischer, director of Transition Services, which includes the DSO, acknowledges that this number was not reached by mistake.

“This is a result of a very targeted outreach,” Fischer said.

Fischer, along with Disability Specialists Brenda Garcia and Renee Hundley, worked harder than ever over the last year informing students, staff and faculty about the DSO and the services offered.

Fischer and his team were proud of the numbers and thank the faculty for working with the students and the office to help create one of the DSO’s most successful semesters yet.

Fischer and his team hope to continue to reach out to all students who attend Del Mar and hope to knock down barriers to ensure that academic success for a student with disabilities is a possibility.

“Disability services exist to level the playing field of accessible success for students with disabilities,” Fischer said. The DSO believes this not only includes those with physical disabilities but especially those who struggle with mental health.

“We’ve seen an increase of students who have more mental health issues like anxiety, OCD, ADHD, compared to what people think your normal disability is,” Hundley said.

The DSO is also concerned that they have not spoken to every student who might be in need of some form of accommodation.

“We really think there are a lot more students out there,” Hundley said. “I think the stigma is what keeps people away.”

Any fears that students might have of being singled out in their class, of being labeled should know that the DSO will respect the student’s wishes.

“They have the control this time,” Garcia said. “They get to be treated like the adults they are.”