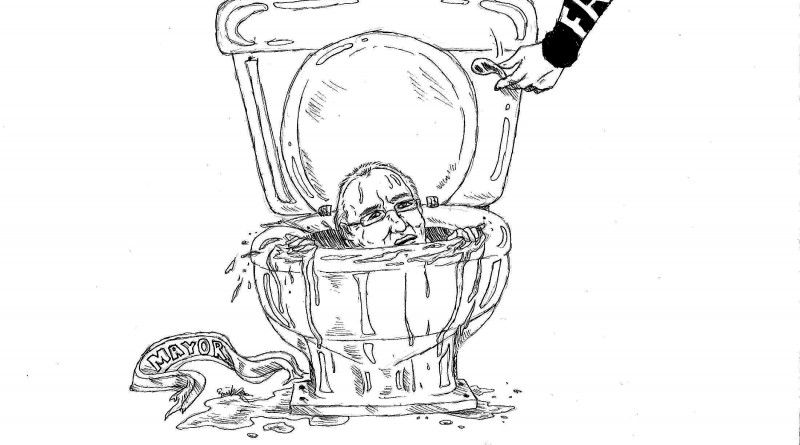 At a time when few know what to believe in the news — especially when read online — Corpus Christi residents are fortunate to have a local media that does not stop in its pursuit of the truth.

Former Mayor Dan McQueen is the perfect example of what happens when elected officials refuse to answer to the media, which holds them accountable on behalf of the public. The situation with McQueen almost directly follows the road map of what many worry the Trump administration is on the road to.

McQueen in fact became so distrusting of and unwilling to work with the media that he resigned via his Facebook page rather than an official news conference.

But this issue speaks to a larger problem in this country as of late. Our new president, Donald Trump, has discussed on multiple occasions his distrust of the media, going as far as to say that they “attack” him. McQueen told KIII-TV anchor Joe Gazin, just hours before he resigned, that he too felt attacked by the media.

In his interview, Gazin asked McQueen if Facebook was in fact the proper place to vent his frustrations.

“Well I don’t have a Twitter,” McQueen said with a laugh. “I can’t trust the media. You’re going to take whatever piece you want and make it something that’s gonna give ratings.”

McQueen used his distrust of the media and claims of personal attacks as a reason to block the local media at every turn over the course of the few weeks that he was mayor but was unable to produce any proof that he was ever harassed or attacked by members of the media.

In an age with so much attention on fake news, the mayor should not be creating more of it. When McQueen took to Facebook to imply that the members of the City Council were uneducated that is exactly what he did.

He lied to the public in an attempt to turn favor to himself. When confronted about why McQueen said he had felt attacked so he retaliated. Even if he did feel attacked, his retaliation attempt itself was untrue and against the very principles he said he stood for.

Rather, reporters for the local news stations and the Caller-Times simply did their jobs and dug into the past of the person elected to lead the City. McQueen called plays directly out of the Trump playbook and the taxpayers now are not only out a mayor, but on the hook for a special election.

The truth of the matter is that the taxpayers allowed themselves to end up in this situation. By electing a man one of the city’s highest offices that very little was known about. By letting people running for office who blame the media at every turn. By electing officials who side step the media and jump to platforms such as Twitter and Facebook for official business. The people of this city and this country have allowed this chaos to take place.

There is no turning back now. McQueen has already done his damage and Trump has taken office. The only thing to do at this point is to stand behind the members of the media that are doing their jobs and keeping the public well informed.

When public officials are allowed to control the narrative with social media, make false accusations and attack other political officers, the water gets murky.

Its time to see through the accusations and stick to the facts.