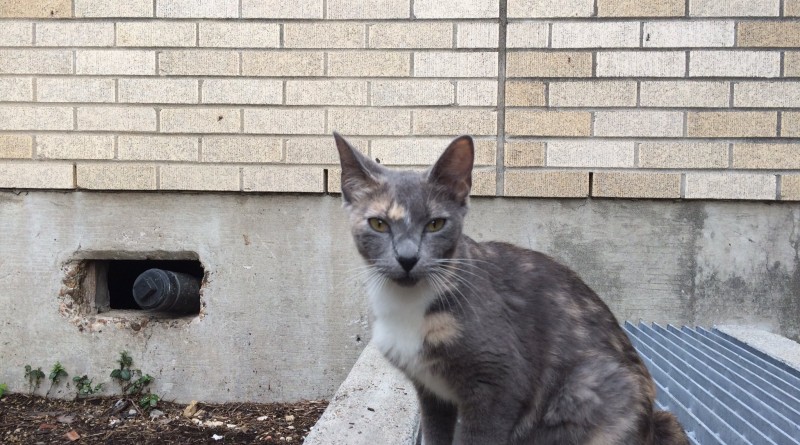 Creamsicle, a small stray kitten, makes her way out of the branches near the Harvin Center with her two other feral friends, Schnitzel and Raven.

“As we’ve learned, we have to give each little kitten their own little container of food or they’ll steal from each other,” said Allison Dozier, caretaker of kittens on campus.

In recent weeks, as the feral cat population on campus has increased, students such as Dozier have been aiding them with food and water.

Student organizations like Pet Pals at Collegiate High School have taken it upon themselves to secure the cats on campus. Dozier, the president of Pet Pals, has created a rather safe environment for the cats.

“I’m glad I’m able to give them a meal Mondays through Fridays, but I feel like it could be a lot better,” Dozier said.

Kelly White, director of Environmental Health and Safety, discourages students and staff from providing for the strays on campus.

According to White, rats, roaches and other vermin will come eat the leftovers of the feral cats. “It causes more problems if the cats don’t get the food,” White said.

“They bring other vectors; they bring fleas that can cause illness to students, faculty and staff. If a cat scratches a student they can catch rabies,” White added.

According to White, students and faculty who are feeding the feral cats are most likely to damage the animals; cats become dependent on humans once feeding them. When students begin distancing themselves or moving colleges, the cat’s health could deteriorate and lead to death.

Scott Person, co-founder and president of the board of The Cattery Cat Shelter/Cattery Spay/Neuter Clinic, said the best way for feral cats on campus to live is with help.

“Having official organizations that are trained to manage the colonies, this includes feeding, spaying and neutering, and vet care, is often the best and safest course of action for both cats and humans,” Person said.

According to Person, cats should be trapped, neutered and returned. “This is the only proven way to limit the number of cats living in a colony,” he said.

Dozier, president of Pet Pals, is in the works of getting the campus cats adopted and has set aside money for the spay and neuter of the cats.

“It’s going to be sad to see them go. We love them all and like seeing them every day, but we will all feel better knowing they’re in a safer and more stable home,” Dozier said.