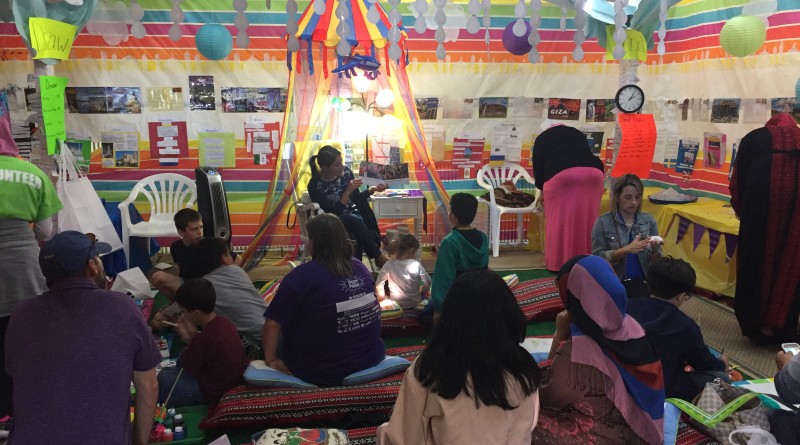 The Islamic Society of Southern Texas gave locals another chance to get a taste of their culture with the fourth annual International Food Festival. Hosted at a local mosque, the event was an opportunity for many to get a firsthand look at Muslim culture and how it varies.
Featuring foods from over 10 countries in the Middle East and Asia, the festival also had a bazaar and activities for guests, such as a petting zoo and a rock wall, as well as a tour of the mosque and a question-and-answer session about Islam.
Within the mosque, Imam Rami Sabawi and local attorney Naved Qazi spoke about how Islam is “a religion and culture of peace” and that the majority of Muslims disavow any violence or terrorism. They opened the floor to questions of jihad and what the Muslim culture is all about, which the Imam and Qazi stressed is a religion of peace and has various traditions that people need to learn about before they can judge.
The idea of peace that was stressed within the mosque is one that many attending the event agreed was one of the positive aspects of the festival. In an age of “travel bans” and widespread Islamophobia in America, many said opportunities like this can be crucial.
Claire Scaggs, a former journalism student from Del Mar, said the festival “is a way to get to know your neighbors and be exposed to the diverse culture in Corpus Christi.”
While the rhetoric around Muslims can often seem hostile, the air at the food festival was joyous and light. As many ate and enjoyed the various activities at the event, some like Iqra Niazi, a biology sophomore at Texas A&M University-Corpus Christi, were volunteering at the festival.
As she helped people around the mosque, Niazi called the event “a great opportunity to see the Muslim culture firsthand.”
The festival also featured a lot of kid-friendly activities, such as a petting zoo and henna tattoos. Chris Becho, a science teacher at Carroll High School, brought his own child and younger brother to show “a positive view of Muslims” and to “expose them to a different culture outside of their own.”
The festival was also praised by many in the community such as police officers Marty Jasso and Ruben Vela, who were working the event.
“Everyone loves food,” Jasso said to a laugh of agreement from Vela. “Events like these are a chance for everyone to see that we are all the same. We all like to eat and laugh and have fun.”
Former Mayor Nelda Martinez, who was attending the event, said the event and other events like it “are rare opportunities for the community to get a look at an underrepresented culture.
Habiba Fayed, a nursing major at Del Mar, said “the media doesn’t always view Muslims in a fair or positive light, but events like these show that we are like everyone else. Before you judge us, why don’t you get to know us? We just want to feel welcomed.”