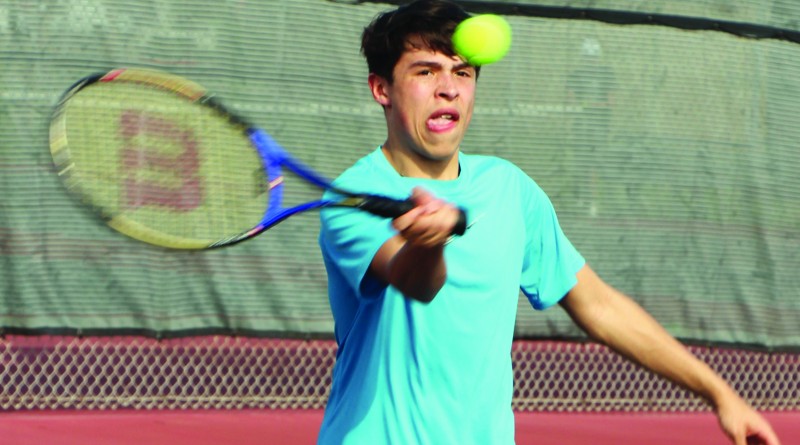 Intramurals singles tennis tournament had a great turnout with 11 players signed up, ready to play and racquets in hand. Unfortunately time restrictions and the inability to have a second day due to several players unable to return the next day led to more of a “thanks for coming out, here’s a T-shirt” type of feel.

Nonetheless the competition was highly competitive as well as very humid and hot, forcing one Gage Freeland to change from wind pants to shorts to deal with the heat. There was water and tennis racquets provided by the intramurals sports workers for anyone who needed them. The highlight of the day was a pair of longtime players actually turning out to be sisters.

“I’ve been playing since I was 8 and fell in love with the sport cause my whole family has been avid tennis players. In high school is when I started getting competitive because there is more of a team aspect and teammates motivating each other. This is my second time playing intramural tennis and here there is more of a singular competitiveness but is still very fun. The fact that I can play this sport for several decades is the difference compared to other sports that I appreciate. In basketball and football you don’t see 40 or 50 year olds playing competitively like in tennis or golf,” said Alex Barrera, who was joined on the court by her sister Sarah Barrera. “I just expected to have fun out here and win,” said Sarah when asked what she expected from intramurals this semester.

The next sport for intramurals is basketball starting on Mar 21, which has been highly anticipated since the completion of the new gym floor. Having seen several students playing pick-up games in the gym indicates an urge to compete and win. Go to the intramurals office, which is in the kinesiology building room 108, to be put on a team if need be.