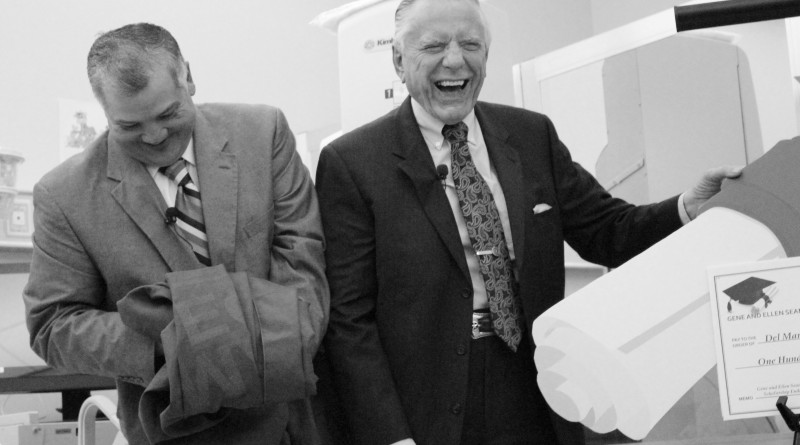 Gene Seaman’s eyes filled as he told of what inspires him and his wife to give so much to students.

“We were from Buffalo, New York. I had worked on a farm as a boy to do hard labor, and barely made it through high school. In fact, I flunked algebra and flunked geometry” Seaman said.

Seaman shared his story after presenting the DMC Foundation with a $100,000 endowment check for The Gene and Ellen Seaman GED Scholarship on April 10 in the Health Science Building at the West Campus.

The Seamans have been providing 5,000 a year since the scholarship was established in 2006, giving at least five GED students a $700 scholarship to help continue their education entering college.

Nursing student Melinda Siotos got her start after receiving her first scholarship, the Gene and Ellen Scholarship, in 2013.

“Through my hard work and determination and along with Seaman’s generous support I am now the level-II nursing student that I have been working hard to get to,” Siotos said.

“I want you to believe in yourselves, even when past hardships or others seem to have set you up for failure,” Siotos advised current and future GED students.

As a single mother and full-time Del Mar student who works part time, Siotos is familiar with the challenges of attending college.

“Let go of the thoughts that weaken you, change yourself as you want to be and let go of the fears about being judged or too old to attend school or too far behind,” she said.

Gene and Ellen Seaman serve on DMC’s Board of Trustees and have a long tradition of giving to Del Mar.

“Now that we have funded it permanently, when I’m dead and gone it will still be there. God willing I might even add more as the time goes on to make it even bigger than it is now,” Seaman said.