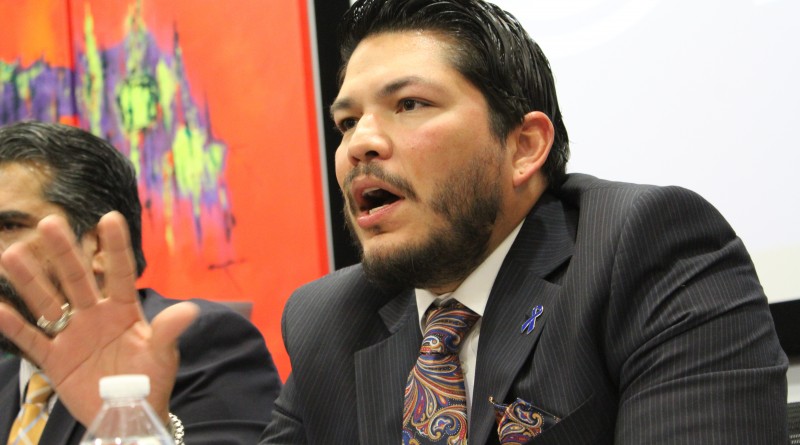 A panel of five legal professionals recently visited Del Mar College students to help guide them into the world of judges, court reporters and attorneys.

“How did I get here? Blood, sweat and tears,” said Nueces County District Attorney Mark Gonzalez. “I didn’t know how to be a lawyer, but I knew I was going to try.”

“It was a good event,” said Gabriel Cabrera, president of the Criminal Justice Club, which attended the meeting. “We brought our members and they seemed to be really receptive of it. They gave us a lot of information and it was information we wanted to hear.”

Dozens of professionally dressed students attended the event and learned not only how to become a lawyer, but what lawyers do and the difference they make.

”If you ask most people, they hate lawyers but love their own lawyer. That’s because they’re helping them in a time of need,” said Benavides, one of six on an appellate court that covers 20 counties. “The law allows me to give to others. I think that’s what inspired me.”

To become a lawyer, students must get a bachelor’s degree, go to law school and take exams like the BAR, which takes two and a half days to complete. But while the road is a long and hard one, the attorneys emphasized that getting a career in this field may be difficult at times, but surely worth it.

“Plant a seed of belief in yourself. You’re the soil that dreams are planted in. You’ve got to let it grow,” said Frank Gonzalez. “The success stories are endless, but it all starts with, ‘I’m going to believe in myself.’”

There are a variety of jobs that are in the legal field besides lawyer, including court reporting, something that’s been a topic of discussion ever since the state has seen a lack of them.

“There’s a shortage of (court reporters) statewide,” Benavides said. “In Corpus Christi they were being paid significantly less than in surrounding areas. All our courts are courts of record. It all goes into the book so the appellate court can see what was said and not said.”

This documentation isn’t only necessary in appellate court; court reporters take note of what goes on in court proceedings, meetings, speeches and more.

“Court reporting is a wonderful profession. They’re kind of essential to the system. I think the courts are starting to show appreciation for them, which is good,” said Frank Gonzalez.

The panelists emphasized that not only do they work hard to make sure that everything goes well for their client, but they also stay busy making a difference in the community and in the lives of those they serve.

“They’re always giving back, that’s what lawyers do, and they’re problem solvers. There’s a lot of stress but if you’re doing it right you’ll never be bored,” Rivera said.

The attorneys expressed encouraged students to chase their dreams and pursue their interests relentlessly and with pride.

“Be proud because you can to it and you’re going to,” Mark Gonzalez said. “If you want to do this, it’s achievable.”