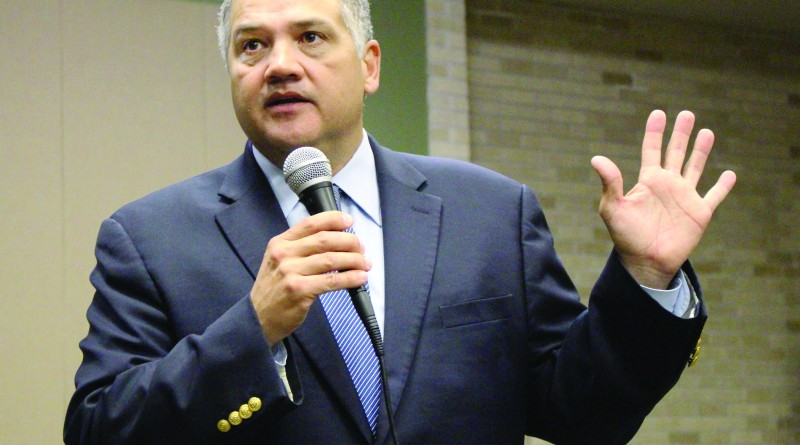 Students had a chance to ask questions of Del Mar President Mark Escamilla during the college’s Pizza With the President event March 23.

The questions at the event were from a wide range of topics concerning Del Mar students including how President Donald Trump’s policies may affect students, the tuition raise, the new conceal carry law and much more.

Escamilla also spoke about the plan to raise tuition and how it will “increase little by little each year to accommodate the new services that will be in place.”

Luisa Cortez, a fellow dental hygiene major, agreed that events like these are a good way to learn about the concerns and issues at DMC, but also said that “an event like this is a good way for to get an answer and get closure.”

After an hour and a half of the two-hour event had passed, Escamilla brought Del Mar Student Government Association President Danielle Garza up to talk to students about SGA and why it is important.

“We want to hear students’ voices and concerns,” Escamilla said, “and SGA is the best way to do it.”

Garza spoke about the current “Think Pink” project that is aimed at making DMC students safer and how the SGA is constantly trying to shape DMC policy to be better for students.

Beverly Cage, director of Student Leadership and Campus Life, said if you want Del Mar to change something or have a great concern “come to the SGA meetings.”