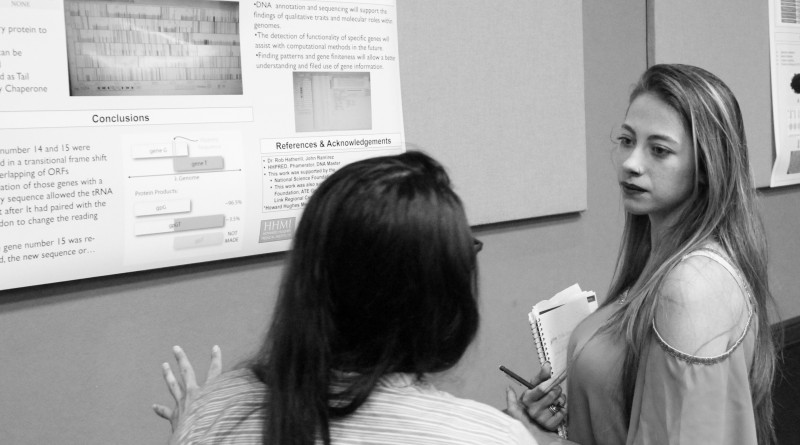 Del Mar student Lara Clancy was ecstatic when she realized her research might be published.

“I’m so excited to be able to work with and help a nonprofit group save sea turtles,” she said.

Clancy and her research partner, Erica Duncan, held their research on display at Student Research Day, hosted by Del Mar College in the Harvin Center.

Dr. Geert Schmid-Schönbein, professor and chairman of the Department of Bioengineering at the University of California San Diego, spoke at the April 21 event. Schmid-Schonbein’s lecture was titled “Autodigestion and Proteolytic Receptor Cleavage as Basis for Cell Dysfunction and Organ Failure.”

Poster boards lined the walls, chronicling the countless hours of research and experiments.

Students were all smiles as they presented their research.

John Ramirez worked on his project for nine weeks last summer and said it was a great experience.

“It was amazing. I had to learn so much in the first week,” Ramirez said. “I got to work alongside some pretty prestigious people.”

Other students were just as excited about presenting their research, if not a little nervous. Wyatt Hooks, environmental science major, said this was his second time presenting research.

“I’m still a little nervous but it’s better,” Hooks said. “I really like this stuff though.”

Jennifer Charajay, biology major, spoke on the pride that she feels when she presents, saying, “It’s pretty fun but nerve-wracking.”

“It gives you pride because you get to show off what you did this semester,” Charajay said.

Assistant Professor of Biology Robert Hatherill said “it’s just a fantastic feeling” getting to see his students present their research.

“I’m so happy for them because they’re so excited,” he said.