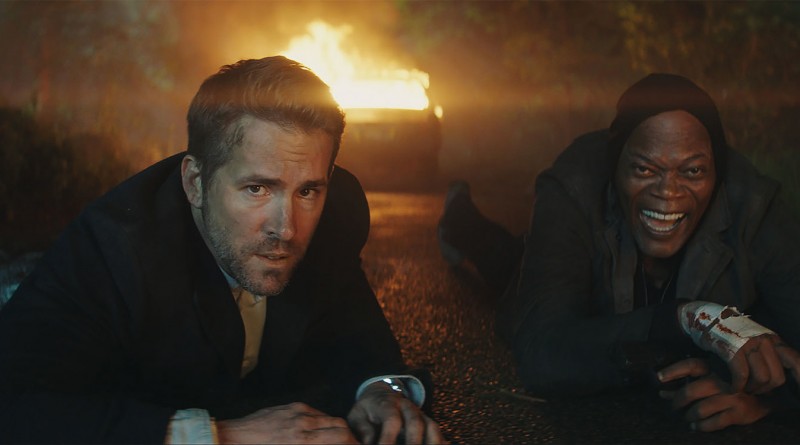 Ryan Reynolds and Samuel L. Jackson headline the latest action-comedy from director Patrick Hughes, “The Hitman’s Bodyguard.” Originally intended to be a drama back in 2011, the film underwent drastic rewrites to be more of a comedy. Jeff Wadlow had been set to direct but backed out in March 2016. Hughes signed on to direct the film shortly after, and the result is a solid way to end the summer movie season.

Triple-A rated bodyguard Michael Bryce (Reynolds) falls from grace after one of clients was assassinated, resulting in Bryce losing his status and business. When the International Court of Justice has a hard time finding physical evidence to prosecute the dictator of Belarus, Vladislav Dukhovich (Gary Oldman), their last hope is to get hitman Darius Kincaid (Jackson) to testify against him. When Dukhovich’s men attempt to assassinate Kincaid, Bryce gets a chance to gain back his former glory by bringing Kincaid to The Hague safely to testify while dealing with ambushes and bickering with Kincaid.

Reynolds and Jackson are the major highlights of this film as their bantering alone is worth the price of admission. Audiences can tell that they were having a blast making the film and their chemistry on screen is perfect. Oldman even manages to be an effective villain, nailing his Russian accent he learned from the “Call of Duty” video game series.

Hughes, who directed the PG-13 watered down “The Expendables 3,” has taken the criticism from that film and applied it to this one with the action sequences. It is filmed and edited miles better as you can tell what is going on in each scene and flows well, making this a huge improvement for Hughes.

The film’s plot isn’t really anything special as it’s just a tool to set up bickering between Reynolds and Jackson, which for this film it works. There are times where it tries to be serious in certain scenes, making it feel like it’s tacked on to make the film go a bit longer. But fortunately, it doesn’t detract from the fun time audiences will have.

Reynolds and Jackson work great together and are a blast to watch on screen, making “The Hitman’s Bodyguard” worth checking out in theaters. And it is also a huge step up for Hughes, as he managed to direct a fun action flick, and it’s only up from here for him as a director.