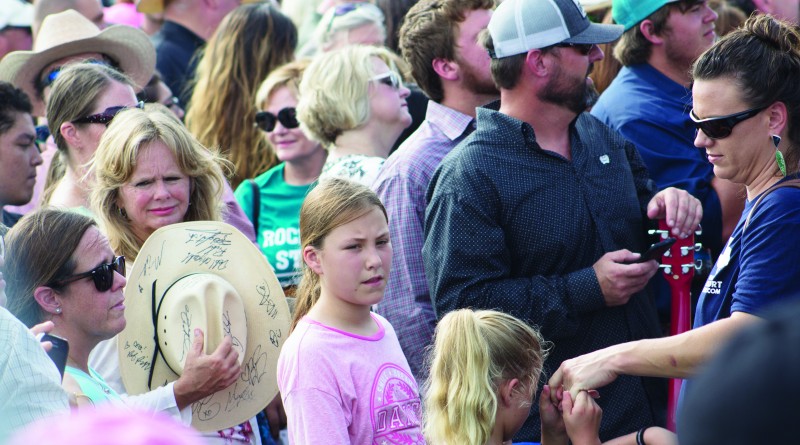 Deb Honeycutt and her homeschool group stand in a crowd waiting to get an autograph or photo with George Strait. Others in Photo: Bella Gilmore, Nicole Gilmore, Traci Poteet, Addison Poteet

The king of Texas and the governor visited Rockport Sept. 21 to meet and greet locals.

Country music legend George Strait was joined by Gov. Greg Abbott, as well as Secretary of Homeland Security Elaine Duke. A line wrapped around the local ACE hardware store and down the street before eventually converging into a mass of people hoping to get their cowboy hats signed.

“We need to shine a spotlight on Rockport and let the nation know how important and special this place is,” Strait said

When Strait took the stage the crowd erupted with excitement. Strait organized the “Hand-in- Hand” telethon that raised more than $44 million for Harvey relief earlier this month.

“My wife and I own a house here in Rockport and we like it just the way it was, and we want to make sure it gets back to that way. Heck I wore my fishing shirt today, I’m ready to go fishing!” Strait said

Strait went on to share that this community holds a special place in his heart, and that he enjoys spending time in Rockport. He mentioned some of his favorite places to eat and spend time at.

Abbott said there are more than 5,300 government personnel in Aransas County rendering aid, with more on the way.

“Bottom line, we are going to be here to make sure we get this place up and running again,” Abbott said

Abbott affirmed that the communities of Rockport, Fulton and Aransas Pass have not been forgotten.

“I think the goal was to provide a pep rally and encourage the community today. And it worked,” said Nichole Gilmore, a local who stayed with her family through the storm.

Locals have been working daily to repair their homes, businesses and community. As the days pass the initial eagerness starts to wear off, and exhaustion sets in.

“At first everybody was all fired up, but as the days passed the energy depleted and everyone went back to their daily grind. Hearing and more importantly seeing George and Gov. Abbott today helps to remind us that we are not forgotten,” said Deb Honeycutt, a local who rode out the storm.