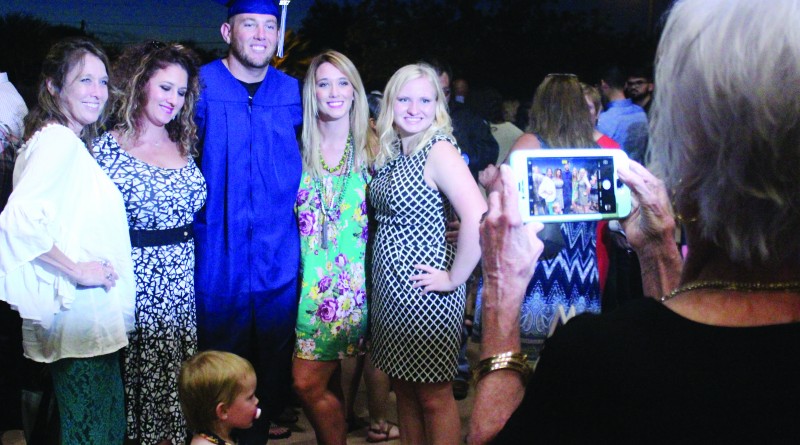 Cheers resonated and cameras flashed as more than 200 graduates crossed the stage to receive over 500 certificates and degrees on Aug. 17 at Richardson Performance Hall.

“Each one of you graduates tonight is a winner,” said Del Mar College President Mark Escamilla, who kicked off the ceremony.

“If you have the will to learn, Del Mar College will help you achieve,” said Escamilla, who then took time to express his pride in the graduates and took the time to have students stand and be cheered for if they had graduated while working, raising kids, if they were over 40, in the military or if they were the first to graduate in their families.

“I’m proud. I’m 40 years old with 3 kids and I’m the first to graduate out of 10,” said Dulce Gomez, who graduated with an associate degree in liberal arts.

The ceremony was held in the newly redone Richardson Performance Hall, and for many, it stood for a transition into a new, better life.

“My son is 39. He left UTSA and got into the workforce and never came back (to school),” David Rodriguez said about his graduation son, Marco. “He’s got 2 girls and a wife, and we got him to go back to school. It’ll open up a whole new world for him. I’m very proud.”

The keynote speaker for the night was chief of the Corpus Christi Fire Department, Robert Rocha, whose speech emphasized moving forward, being your best self and being resilient in the face of adversity and difficulty.

“You will find that reaching your destination by being unconventional will help you experience what others haven’t experienced,” Rocha said. “I hope your experience at Del Mar has made you a better person.”

Kate Collins, who graduated with an associate degree in social work, worked hard even through pregnancy and employment to get where she is now.

“I was in labor with her during finals,” Collins said, motioning to her infant daughter, Selena. “I was actually writing my final speech. … I have two kids and worked a job, but it’s going to get me farther and show my girls not to give up.”

Rocha read the Robert Frost poem “The Road Less Traveled” and referred to Socrates including his test of threes, and the work of John Maxwell. Rocha emphasized that graduates must have positive attitudes about themselves, and that they should never give up when facing failure.

“You will fail more than you succeed,” Rocha said. “In failing, you’ll learn more. In failure, you succeed.”

After being laid off from a job in the oilfield, and working for two years to receive a degree in applied science processing tech, Colton Gaither already has change in front of him.

“I’m going to work Monday, in Midland,” Gaither said. “I was working in the oilfield and got laid off, but this is something similar. All my family are plant operators. I just want to thank my family for the support.”

When graduates moved their tassels and their families around them erupted in applause, a page was turned and a new chapter opened for them.

“I envy you,” Rocha said to graduates. “After tonight, you start the greatest adventure of a lifetime. I hope my message to you encourages you to move forward.”