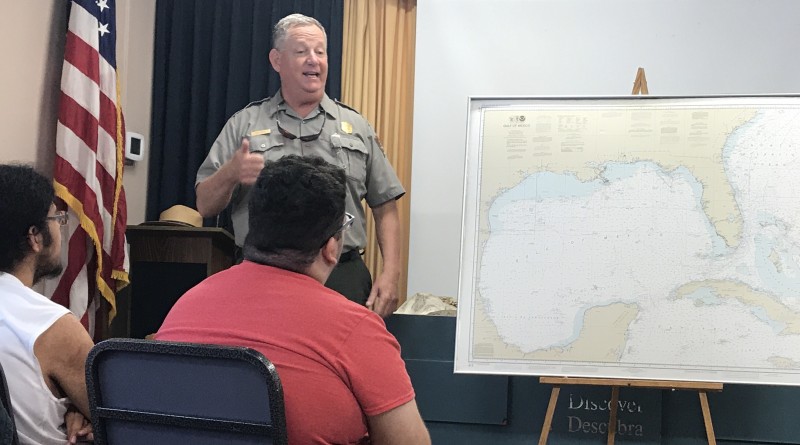 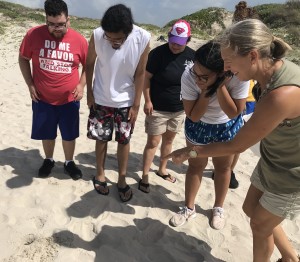 Walking along the Padre Island National Seashore, biology student Amanda McCowen and classmates went searching for living organisms unique to the longest barrier stretch of shoreline in the world.

“I love the beach, it’s pretty clean out here,” McCowen said. ”I would recommend the National Seashore; it’s a different experience, a different world out here and a whole lot to learn, too.”

Professor Lillian Bass and students drove out to the National Seashore for a biology field trip, studying the evolution of organisms.

While students were walking on the island, they were able to witness ghost crabs, coquina clams, sargassum and other organisms. However, they hardly saw shells.

William Botts, education coordinator for the Padre Island National Seashore, explained the reducement of shells on the island to students.

“One of the things most people never stop to think about is that the number of shells you’re going to find on the beach simply is a reflection of how healthy the population of the gastropods are,” Botts said. “People don’t stop to think about the fact that living organisms live in shells.”

Shells are the exoskeleton of organisms such as snails, clams and oysters and should be put back in the water after observing, Botts said. Taking shells home can kill the organisms inside.

The National Seashore is known as the nesting site of sea turtles, holding more Kemp’s ridley sea turtles than anywhere in the United States and making them accessible to the public.

Patrick Gamman, chief of interpretation at the National Seashore, explained the decline of the Kemp’s ridley sea turtles in Mexico and the United States. Kemp’s ridleys have become the most endangered of all sea turtles.

A decline in the turtles resulted from the overharvesting of eggs, adult turtles being caught in shrimp nets and plastic in the water and beach, Gamman said.

“All these things combined … they almost went (extinct). They were close and so that’s why we’re doing all this work to bring them back,” Gamman said.

About 220 Kemp’s ridley nests were found the the Seashore in 2017, with 353 being reported across the state, according to the National Seashore.

In a discussion with students, Botts mentioned the entrance fees to the park might rise. The fees might make the seashore less accessible to students and visitors.

“A few years ago Congress started to see that parks had not raised their fees in a long time. … There is a proposal, we were directed by secretary of the Department of Interior to explore with local communities about raising our fees…,” Gamman said.

From 6-8 p.m. Sept. 13, the Padre Island National Seashore will hold an open house to discuss the proposed increases and entrance fees with the public.

The current fee to enter the National Seashore is $10 and a season pass is $20. The last entrance fee increase was in 2000.

As students walked back to head home, they looked back at the ocean with new knowledge of the seashore.

Alexander Klaven, a biology student, had a strong first experience at the National Seashore and plans to return.

“I haven’t been to this beach … the experience was good, definitely really hot,” Klaven said. “I was actually learning stuff that was interesting.”