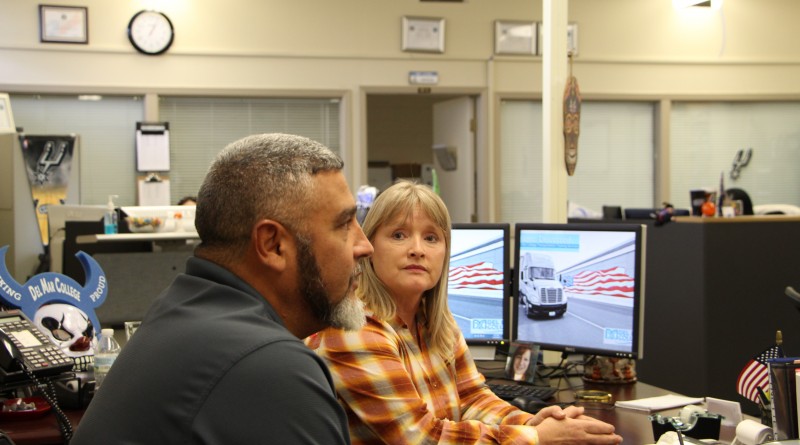 Lynette Cervantes, a DMC truck driving instructor, remembers the day clearly. It was below freezing and she was sitting in her truck at a truck stop just outside Albany, New York. She was looking down into the eyes of a young girl in a short skirt and a flimsy coat. Cervantes had just been solicited by a young girl who was a prostitute.

“I denied her company; however, I invited her into my truck so she could get warm but then she told me, ‘If you are not going to date me then I need to move on,’” Cervantes said.

When the young girl left to the next truck, Cervantes called law enforcement. They showed up, rescued the girl and then apprehended the man who was prostituting her.

Cervantes did not save just one life, she saved countless others. This is the memory she will always live with.

Driving a truck is not the only skill drivers learn. The Del Mar College program adopted Truckers Against Trafficking (TAT), a nonprofit organization dedicated to fighting human trafficking, in 2009 and it has been a part of the curriculum since.

“A lot of our big carriers are heavily involved with TAT and it looks better on a student’s resumé when they go out and try to get a job,” Cervantes said.

In every class they show a video demonstration on how truckers can identify human trafficking activity. The video uses firsthand experiences of young girls who were kidnapped from a Wendy’s restaurant and forced into prostitution at truck stops.

According to Jaime Flores, DMC truck driving instructor, the class reacts more when children are involved.

“They don’t really expect it so when they hear a child is involved they just hit ground level,” Flores said.

The instructors in the program each have their own experiences and encounters with people who are stuck in human trafficking. Flores said this is something they talk about almost every day.

“Everything we tell them is life experience on what we dealt with, basically giving them a shortcut in knowing already once they get out,” Flores said.

Craig Mason, a transportation student, did not expect to learn about human trafficking at truck and rest stops. He gained a new respect for truck drivers and aspires to be one.

“It made sense with the video since truck drivers travel across the country so they are the eyes and ears on the road,” Mason said.

Truck drivers are not the only ones on the road. Cervantes wants more people, including regular drivers, to be aware of what is going on at truck and rest stops and to be able to spot the signs of human trafficking.

For more information visit www.truckersagainsttrafficking.org or call 1-888-3737-888 to report human trafficking while on the road.