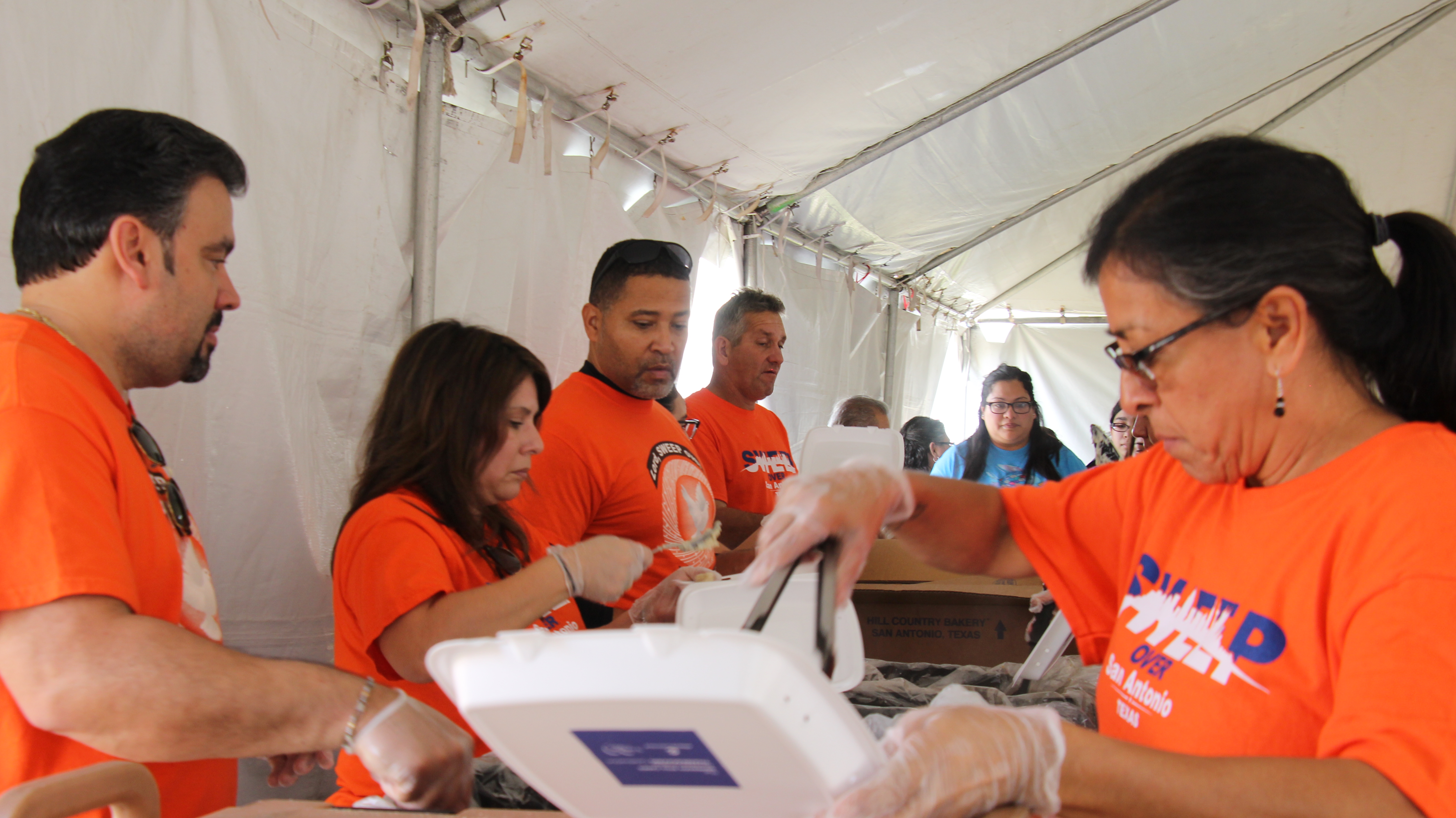 ROCKPORT — The road to recovery has been a long one during the months following Hurricane Harvey. On Nov. 11, however, it stretched all the way from San Antonio to Rockport, as volunteers from Highland Park Community Bible Church donned orange T-shirts and carpooled to the Church Unlimited campus, where they provided 5,000 Thanksgiving dinners for residents in the area who needed them.

Along with Highland Park Community Bible Church and Church Unlimited, the event was also done in partnership with the relief organization, Somebody Cares.

Mark Roye is a field operations manager for Somebody Cares. He had been in Rockport the first Sunday following Harvey’s Aug. 25 landfall.

“We did 50,000 meals here in 28 days,” he said, adding that the campus became something of a point of distribution for those seeking relief. “Church Unlimited is who (the Somebody Cares foundation is) partnered with.”

Roye said there were as many as 50 volunteers from Highland Park Community Bible Church.

“All we’re trying to do is come alongside (and) help manage the needs of the community,” Roye said. “It’s not our first rodeo … it’s all about (managing) flow.”

In an effort to get the meals to the more outlying members of the community, volunteers from other organizations could also come to the campus to transport the food in their own vehicles. One of the drivers, Portland resident Amy Montgomery, has been actively engaged in volunteer efforts with FEMA, the Aransas County Harvey Donation Center, and various other organizations that have been helping to clean up after the storm.

“We actually started in a (condemned) building … but we ended up at the old H-E-B,” Montgomery said. “Every night and day, I’ve slept in a tent (there because) I felt that those people needed my help.”

Furthermore, the drive to deliver the dinners to Holiday Beach, a short 25-minute drive over the Copano Bay, gave Montgomery the opportunity to take photographs of the damaged homes along the route.

“FEMA’s wanted me to … come join their forces,” Montgomery said. “I’m still staying on with … hiring case managers (who will be working with those) who have no home.”

Roscowe is a veteran of the Iraq War and single father of two, who also helped Montgomery out with the delivery of the meals to residents of Holiday Beach. He lost his home there, when a tornado touched down on it. In the months after the storm, he and his two sons have been staying in a motel in Rockport, which he describes as looking “like a war zone.”

“This place … looks like Iraq,” Roscowe said. “Well … the American version of Iraq.”

After successfully delivering 30 packaged meals to Holiday Beach residents, Montgomery eventually ran out of food. And while the orange-shirt volunteers may have finished up at the church that afternoon, there is still quite a lot of work to do in the Rockport-Fulton area, and according to Montgomery, the next couple of years will be a long and arduous.

“We (have about) five more years to go,” she said. “My plan is to continue staying involved with recovery and rebuilding.”