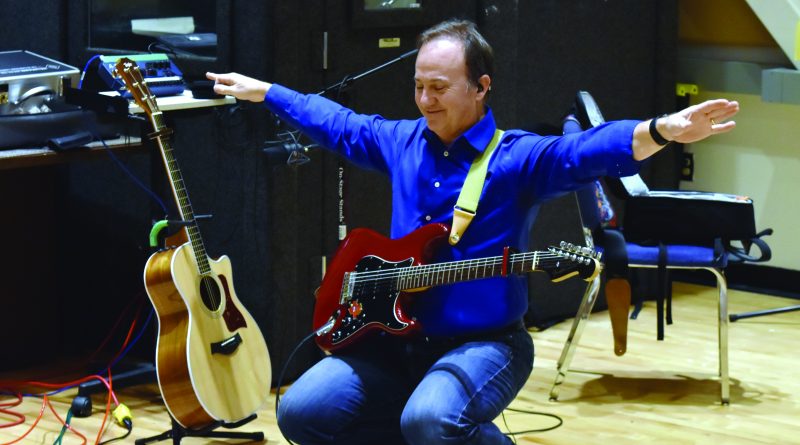 Coalition practices performing and recording together

Paul Bissell and what he calls his Coalition of the Willing re-create classic and iconic songs in Studio A of the Music Building. Bissell, a sound recording technology professor, and his students continuously prove their ability to create recordings that sound just as good as the originals.

“It started basically as a question of, ‘Can I make sounds that sound great without any limitations?’” Bissell said, “and it became a proof of concept for the students that everything they do in this studio is exactly what I’ve taught them how to do.”

The group is made up of music professors and students who were hand-picked and asked by Bissell to participate outside of their scheduled class times.

“It’s his Coalition of the Willing, that’s what he calls it,” said sound recording technology major Brittany Richardson. “He basically bribes everyone with free dinner to come and record for him, gives us a couple months to have the songs ready to play, and when the day of recording comes he has it so well planned that it plays out exactly the way he planned it.”

Richardson began her work with the coalition as a camera operator, and has since progressed to become a performer and later the digital audio workstation operator.

According to Richardson, who had a radio and television degree, her background gave Bissell’s project extra help and expertise with the videos. Richardson joined the coalition around the same time Bissell began video recording the sessions.

“We’d done so many cool recording projects before, and they were never recorded,” Bissell said. “So I thought, all right, let’s just grab some iPhones, and so that’s where it started.”

The Coalition of the Willing has since upgraded their video equipment to include multiple stationary cameras and even a mobile handheld camera.

“A lot of people in there are very seasoned musicians,” said Elo Sutphin, a sound recording technology major and also a member of the group. “it’s an honor to get picked and play for the coalition, it’s a big deal.”

Sutphin was first asked to join the coalition for the “Fight The Power” video uploaded in April 2017, and has since performed with the coalition twice.

“It’s amazing, everybody works together to make it happen, but nothing would happen without Dr. Bissell, he’s amazing,” Sutphin said.

Bissell records, edits and uploads the videos to YouTube himself, according to Sutphin.

The videos are shot during the recording session and are uploaded to YouTube within 24 hours. Bissell strives to keep the video content as close to a live shoot as possible without adding effects or editing too much out, including possible mistakes.

“We’re not going to auto-tune or make anybody fake and pretend like it was done live,” Bissell said. “What you hear and what you see, that is what actually happens.”

Bissell’s focus for these videos is the music production and making it is sound as good as can be. While he notices his video skills are less professional than the audio, he is open to outside collaboration.

“If someone really wanted to help me and if they thought it would be good for their students or good their program or even for them personally, I say jump in,” Bissell said.

The Coalition of the Willing’s videos can be found at www.youtube.com/user/pbissell1.