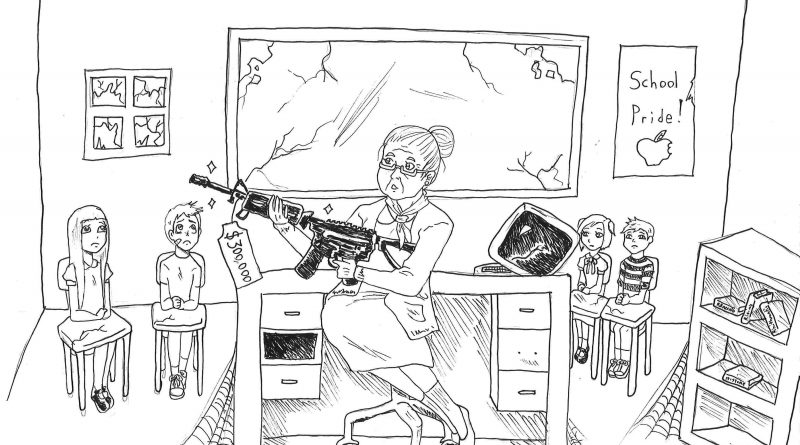 It’s a scene we’ve almost become used to seeing but one that nobody should ever have to experience — students running for their lives. Yet while mourning the loss of 17 of their classmates and teachers, the students of Marjory Stoneman Douglas High School in Parkland, Florida, were on their way to speak with their elected officials about limiting gun rights.

No matter what age, students have the right to feel safe on their campus. That right is more important than the gun rights so many fight for.

In 2017, the year of spiked mass shootings, Senate Bill 11 took effect for Texas community colleges, a year after being implemented at public four-year universities. The bill allows anyone who has a concealed carry license permit to bring handguns into classrooms on campus. The decision to write up SB 11, however, was made early on in 2015 — the same year as the infamous mass shooting at Umpqua Community College in Roseburg, Oregon. Ten people were massacred and nine were wounded.

Texas universities and colleges, including Del Mar, have their hands tied concerning guns on campus because of the Texas Legislature. Instead of leaving the decision to individual institutions to make, Texas is one of only 10 states that strips campuses of that choice — and, in doing so, strips many students and faculty of their safety when they come to school in the era where one of the most common ways to die is to get shot.

Only entering the third month of 2018, CNBC reported that the United States had already seen 18 school-related shootings, eight of which caused severe injury or death. That follows 2017, when approximately 345 mass shootings took place, according to AOL. Nothing can justify this number in a country as developed as the United States, so why do we try?

SB 11, also called “campus carry”, in its very nature nothing but controversial. However, it should be easy for anybody to see why guns have no place in educational facilities. When we go to classes every day, we expect to be safe. Arguing that guns are not a factor in gun violence is not only dangerous, but also incredibly insensitive. It’s troubling to know that people our age were shot after doing nothing wrong, but it undeniably shakes the core of the mother, the sister, the friend of the life that was halted by a bullet, that came from a gun, that made a person die.

It’s true what they say, that it’s people who kill people — but they do it with guns, and they’re able to reach plenty of people that way. It’s also true that the answer to guns is not more guns, despite what proponents of campus carry.

On Feb. 28, a teacher at Dalton High School in Dalton, Georgia, was taken into custody for firing a handgun at back window in his locked, barricaded classroom. Although no students were injured, the argument of arming teachers makes little sense.

This makes us wonder why we defend the involvement of deadly weapons so heavily, especially when it concerns establishments of diversity, progression and education that are community colleges.