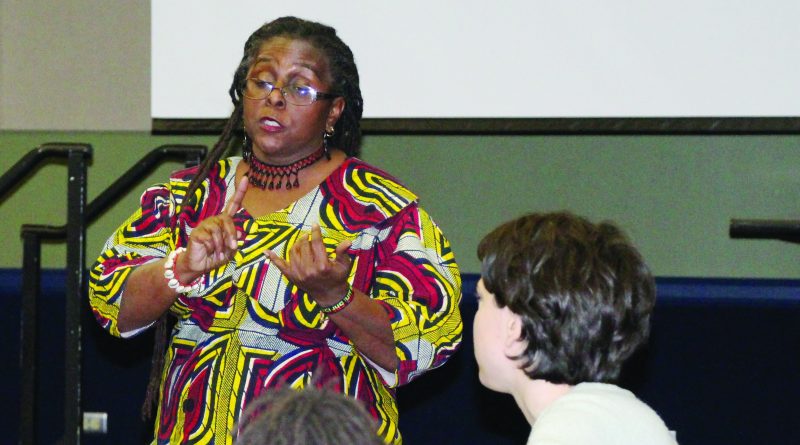 History has many stories to tell and many of them can be told through the color of your skin.

“If you don’t know your history anyone can tell you anything about you,” Pamela Safisha Hill told students as part of a Black History Month event Feb. 21 at Del Mar College.

Hill, a professor of black studies at the University of Texas at Arlington, explained how many of the stereotypes regarding African-American culture are not just caused by racist bigotry but also by a misunderstanding of the culture as a whole.

“We don’t look to Africa for anything that’s a dark continent, those are savage people,” Hill said sarcastically.

Hill continued to explain how knowing the whole story and the history behind African culture can give blacks a larger understanding of their culture and what is happening in the community.

“Egypt is not the original name; that’s the name the Greeks gave it. The original name of Egypt is Kemet, which means land of the black people,” Hill said.

Liberal arts major Evelyn Villarreal, who is enrolled in the African-American studies course that was recently added to the curriculum, was able to pull some insight from Hill.

“Well I am taking an African-American history class and my professor suggested we come and see how it falls into what we are learning in the course,” Villarreal said.

This is the first semester Del Mar has offered the African American studies course and Villarreal was able to gain new information from an outside source about her current course.

“My hope is to learn the accomplishments of the black community and how they moved forward,” Villarreal said.

Hill covered a plethora of topics ranging from stereotyping to racism deep-rooted black identity extremists, and the disproportional representation of blacks in the media.

“Black people have a perceived notion of racial discrimination by the police … perceived … they say ‘perceived,’” Hill said.

Through deep explanation and historical evidence, Hill was able to tell students such as Villarreal about African-American history in a new light.

“It’s an important part of our history as well they helped build America,” Villarreal said.