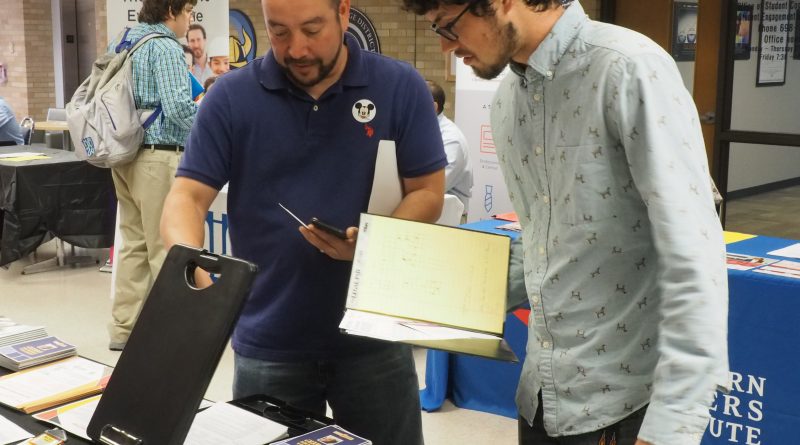 College holds event on both East and West campus

“It’s nice when we have students engaged. They bring their resume and excel in life,” Bosworth, who works at the Texas State Aquarium, said at the college’s April 10 job fair on East Campus.

Del Mar Career Development Center hosted the job fair in partnership with Workforce Solutions of the Coastal Bend. A second job fair was held the following day at West Campus. More than a dozen employers were looking for possible candidates for a job such as Schlitterbahn, the Texas National Guard and Texas State Aquarium.

Bosworth, a Del Mar graduate, applied for a job at the aquarium while attending Texas A&M University-Corpus Christi.

“I started out as a HR assistant and a year later moved up to HR coordinator,” she said.

Bosworth attends every career fair to help get the aquarium’s name out there and recruit candidates for the wide range of jobs offered there, which are not limited to science and biology.

“We have a wide range of departments and things they can do here at the aquarium,” she added.

Jobs range from those dealing with fish and herpetology to housekeeping, and Bosworth said each field has different requirements.

Bosworth added that the aquarium tries to have something for everyone starting in a job and more experienced workers. When a student leaves a strong impression at the job fair, Bosworth said, they hold on to the student’s resume in case that person does apply for a job, so they are sure to notice.

Bosworth tries to visit every college and university in the area for every career fair, but Del Mar College stands out from the rest for the variety of people that apply.

“You get people who have just got out of high school or people who are going back and changing or starting their careers,” she said. Bosworth also stated that Del Mar has more of a variety of students than other colleges and universities.