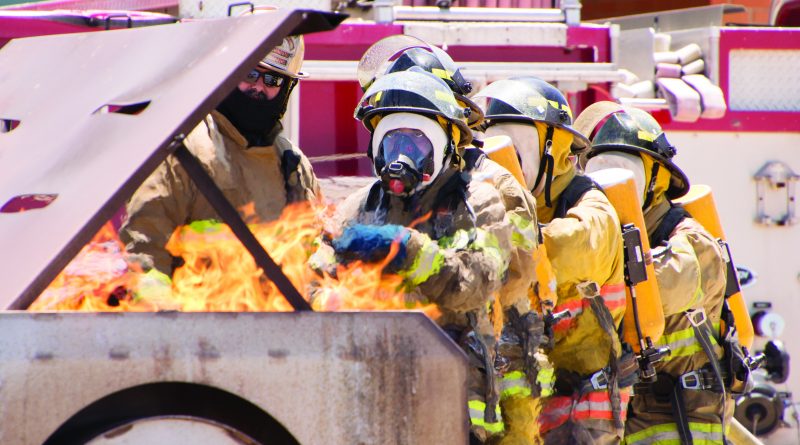 Fifteen men and one woman from Del Mar’s Regional Fire Academy experienced the heat of finals unlike most other students, as theirs involved real fire.

The second-year students tested their skills and extinguished a burning car, dumpster fire, propane cylinder, gas leak and a spill fire as part of their requirements.

Student Kelsey Grottie, 23, was the only girl left in the program at the end.

“I joined this program after my career in physical therapy didn’t go as planned,” Grottie said. “We started the program with four girls and as the semester went on, I was the only one left.”

Grottie said she enjoyed the challenge of proving herself and had a great experience.

Grottie’s mother, Debbie Grottie, explained how her daughter’s transition from physical therapy to the fire academy was surprising but not unforeseen.

“In high school she was really in to power lifting,” the elder Grottie said. “She was even able to win state.”

Family members accompanied many of the students as they gathered to witness the fire exercise.

Cadets Tyler and Chaz Becker were joined by their parents, who were thrilled to see both their sons going through the program together.

“It’s amazing being able to see them go through this program,” said Ginger Becker, mother of Tyler and Chaz. “They’re following in their father’s footsteps.”

After passing this stage of the program, the students will enter into the EMT and paramedics portion.

Michael Schmidt, assistant instructor and interim director of fire science, explained the importance of this step in the program.

“We’ve spent countless hours teaching these cadets how to work gas fires,” Schmidt said. “This exercise is a chance for them to show that they’re ready to be a firefighter.”

Grottie said she knows the upcoming stages of the program will be difficult but that she is ready to tackle them.