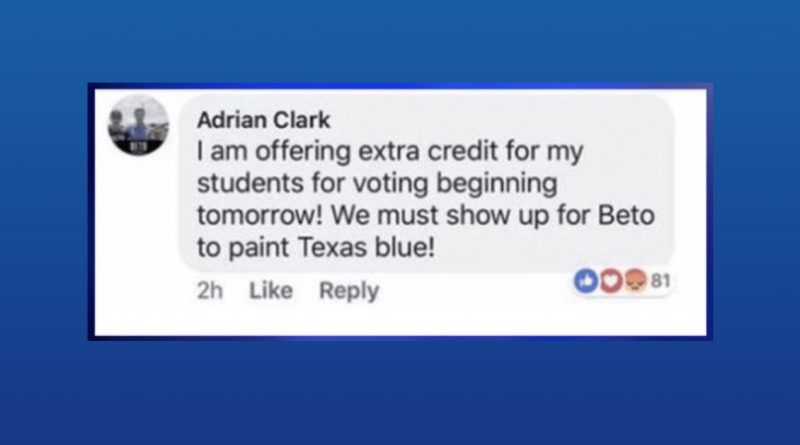 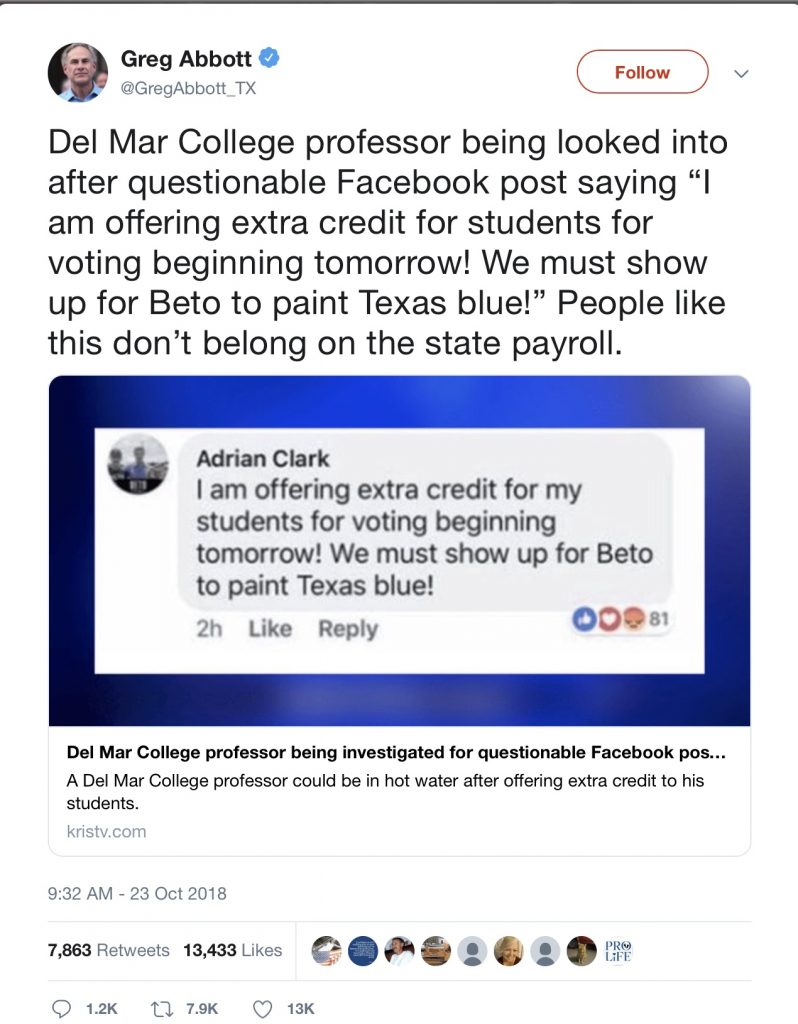 An online political comment by an associate professor of political science at Del Mar College has gone viral, with Gov. Greg Abbott saying he doesn’t belong on the state payroll. But the professor, Adrian Clark, said he didn’t know he was violating policy and denies claims he was trying to influence his students.

“I’m surprised people are so upset and the way it’s being presented,” Clark told the Foghorn News on Oct. 25. “People don’t have the facts. There’s a false narrative that I am giving credit for voting a certain way. That is not the case.” 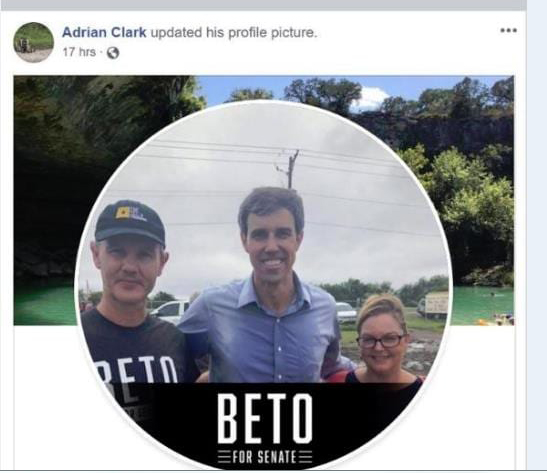 The comment was made Oct. 21 during a live feed on Beto O’Rourke’s

“I am offering extra credit for my students for voting beginning tomorrow! We must show up for Beto to paint Texas blue,” it read.

Clark said he never intended the post to be directed toward students, but rather to share with the other Beto commenters.

“It’s been a distressing experience,” Clark said. “I meant no harm and I honestly didn’t want them to vote for anyone other than who they wanted to vote for. I respect the sacred right to vote. People can vote however they’d like.”

A day after posting the comment, Clark woke to a message from someone he does not know. It read: “So you are the idiot that wants to give extra credit for voting for Beto. I think that is illegal. Time to make you famous.”

“I feel like a victim of a massive witch-hunt. To my students on campus, I advised them to go vote and get 5 extra credit points when they brought me the electronic slip. Other colleagues have done it over the years and we were doing it again. I have never advocated for a candidate in class,” said Clark, who added that he also gave the students who don’t vote the option of writing an essay  to earn the extra credit. 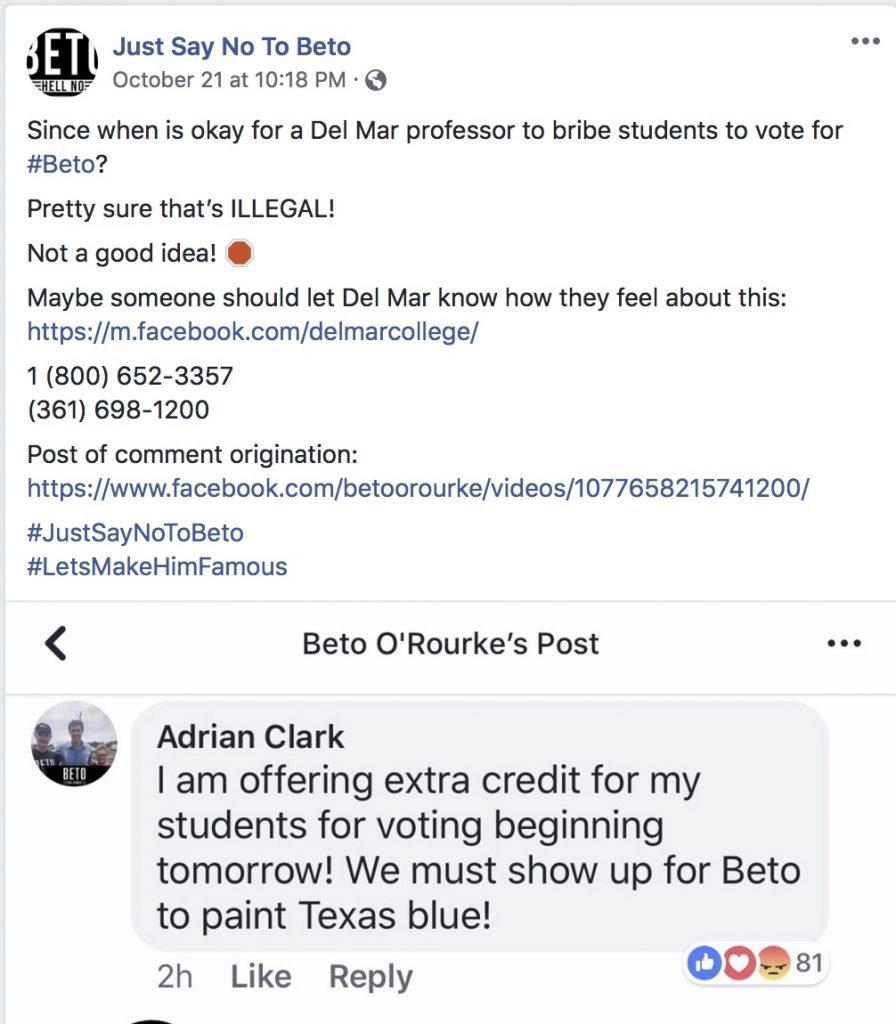 Facebook pages including one called Just Say No To Beto shared a screenshot of Clark’s comment and Del Mar College’s contact information. The page administrators called for followers to contact Del Mar about their feelings over the comment. They used the hashtag “#LetsMakeHimFamous.”

“My intentions were to reach as many people via social media as possible. I feel an educator should not impose their own personal political or religious views on students,” said Brandi Vannoy, co-administrator of Just Say No To Beto.

Vannoy and fellow administrator Georgia Gutierrez said they do not know Clark but felt compelled to bring attention to the comments. When they contacted Del Mar, they received a statement from Claudia Jackson, Del Mar’s executive director of strategic communication and government relations. Jackson released the statement to media clarifying the school’s policy on extra credit for voting.

“The message was not posted on behalf of the College. The College has clarified that no extra credit should be offered or granted for voting in any election. The College takes seriously institutional policy and State law regarding requirements to remain neutral in all partisan political activities, issues, speeches and campaigns,” Jackson said, adding that the college does not comment on internal personnel matters.

Federal law states a person cannot solicit, accept or receive any expenditure to vote for a particular party. However, the law is not clear whether giving students extra credit is considered an expenditure. The Del Mar College policies manual does not state extra credit cannot be given for voting, but it does say a state “employee may not use official authority or influence to interfere with or affect the result of an election or for any other political purpose.”

Abbott’s tweet, which read in part, “People like this don’t belong on the state’s payroll,” was shared nearly 8,000 times. Many commenters called for Clark to be fired while others asked if the response would have been different had Republican Ted Cruz been mentioned.

Clark said he was disappointed Abbott didn’t reach out to him before sending the tweet.

“We encourage our students to vote. I don’t punish students for their views. We have conservative students and liberal. For me, it’s irrelevant,” Clark said.

Once the comments were made public, Clark said, the college informed him of the policy regarding extra credit and voting and also began an investigation into his post.

Clark was not aware of the status of the investigation as of Oct. 25. He continues to teach his classes, but his days are nowhere near routine. He attributes the intensity of this election to people’s fear of fraud or other issues in academia.

“I am on edge. I am getting rude emails from random strangers who don’t know the facts.  It feels very unfair,” Clark said. “I have never advocated for a political candidate in class. I treat all students fairly according to academic performance.  I want to thank the students who have come to my defense.”

Clark, a native of England, received his bachelor’s degree from the University of Sussex and his master’s and Ph.D. from Rice University. He has been a professor at Del Mar College for 10 years.

6 thoughts on “Professor: ‘I meant no harm’”