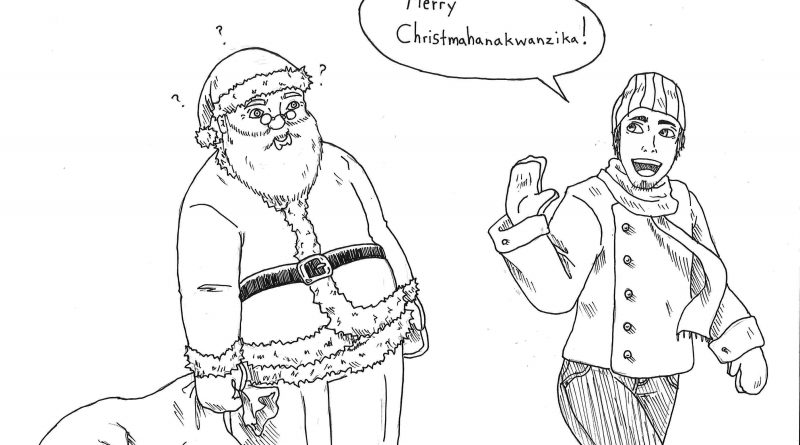 Everyone has had the awkward feeling of seeing someone they know out in public and having about five seconds to determine if you’re going to say “Merry Christmas” or “Happy Holidays.”

In most recent years there has become a huge consciousness of when it is appropriate to say “Merry Christmas” as to not offend anyone. The term has been coined as too religious, leading people to say that it is exclusive of other religions.

One of the main places that we see this transition is in retail.

It can be said that the premise of this argument is solely political in the sense that Republicans lean toward the usage of “Merry Christmas” seeing it as a focus on the one holiday whereas Democrats see the usage of “Happy Holidays” as an inclusive term to include holidays such as Hanukkah.

Retailers have strayed away from using “Merry Christmas” for many years now, realizing that the term had too much that came along with it that could negatively influence the business.

The common ground that “Happy Holidays” was the safe term to be using was disrupted in the 2016 election when then-candidate Donald Trump promised to bring back the phrase “Merry Christmas.”

Many sources say that this will hurt the economy in many different ways especially around the holidays.

With the Christmas season nearing, everyone is on their toes in anticipation to see whether retailers will be greeting their customers with “Happy Holidays” or “Merry Christmas.”

Many may argue that December is the month of Christmas, so saying “Merry Christmas” seems like the common sense thing to do.

But, when you really start to think about it, you question what the real meaning of “Merry Christmas” is. Everyone has their own opinion of what it means but it should simply symbolize a term used for a certain religion and only in that context.

The idea of the holidays still has the centralization of religion, just many different ones that can be simplified in the term “Happy Holidays.”

Businesses and retail stores should remain using the phrase “Happy Holidays” because it doesn’t just include everyone but it creates a unity of celebration for multiple holidays that brings about the true joy and spirit of the holidays.

But, quite frankly, do most people even pay attention to what phrase is said to them?