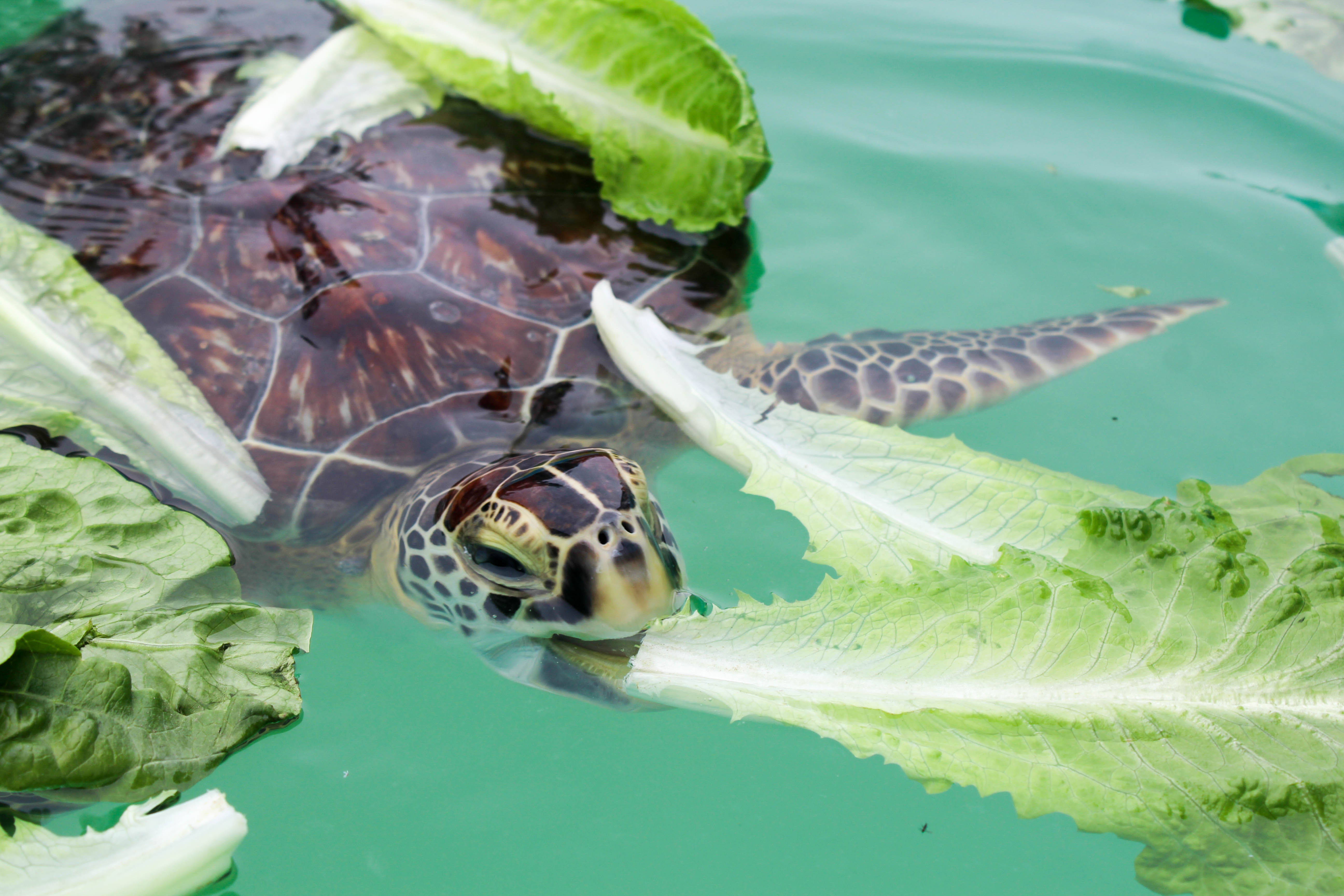 A Juvenile Green sea turtle swims in circles in a large water tank. With wing-like strokes he glides through the water, lopsided. He is trying to swim like a normal sea turtle, but he is struggling. A large bulging tumor has grown under his right flipper, throwing him off balance. To him, the sheer weight of it is comparable to a brick.

It is unclear whether this Juvenile Green is aware of the severity of his life-threatening condition, but if there is anything that is certain, it is that he is not alone.

Many other species of sea turtles in the Coastal Bend also share his torment.

Fibropapillomatosis is a disease specific to sea turtles that is becoming more evident across the Gulf Coast. Fibropapillomatosis, most commonly known as the FP virus, is a strain of the herpes virus that causes cauliflower-like tumors to grow on the faces and bodies of turtles. Although these tumors are benign, they can still interfere with some of their most basic daily tasks and ultimately lead to death.

Just over the John F. Kennedy Memorial Causeway into North Padre Island, there is a small teal colored building that almost appears like a shack.

The workers inside bustle around the building feeding animals, training birds, building enclosures and maintaining six large water tanks that house several sea turtles. This weathered building is the Texas Sealife Center, a sanctuary for the area’s injured and misplaced wildlife.

Out of all the animals the center rehabilitates, sea turtles are their primary focus. The Coastal Bend’s conditions provide a perfect habitat for Juvenile Green sea turtles. The shallow waters of the Laguna Madre, the nearby lagoon, and ample sunlight allow vast sea grass beds to grow with ease, providing the sea turtles with an abundance of food.

North Padre Island is only a small part of Padre Island, which is known as the largest barrier island in the world. The wildlife here is as rich and as biologically diverse as it comes. The Laguna Madre, which sits alongside North Padre, is one of six hypersaline coastal lagoons on the planet. The marches and shallow bays provide a habit for an array of fish and migratory birds.

Until 2010, the disease had not been recorded in the Gulf. Researchers have yet to discover the exact cause of the disease; however, some have linked FP to ocean contaminants and marine leeches.

“FP is not something that we can fix and make go away, but we can treat the symptoms,” Texas Sealife Center volunteer Jamie McWilliams said.

For the past six years, she has been dedicating almost all her weekends to working at the center.

When McWilliams started volunteering she had no experience with animals — now she is the center’s third in command. She has helped build almost all of the animal enclosures that are at the back of the building. According to her, the center is different compared with the other larger rehabilitation centers in the area.

“We are small, but we are mighty,” McWilliams said. “It is really amazing to watch us be able to do the things that we do.”

Although the Laguna Madre’s conditions seem to create a paradise for these creatures, that is not necessarily the case. Sea turtles are ectothermic animals. This means that they rely on outside temperatures to regulate the temperature of their bodies. The Coastal Bend has been notorious for its dramatic changes in weather. During the colder months, water temperatures can drop 15 degrees overnight, creating a nightmarish scenario for the nearby Juvenile Greens in the area.

They are sent into a hypothermic shock. A turtle that is sent into shock is referred to as a cold-stunned turtle.

Cold-stunned sea turtles are unable to sink below water. They instead flow with the water’s current until they wash ashore. This is where the Sealife Center comes in.

“When water temperatures hit 50 or 49 degrees, hundreds of turtles will begin to wash up,” McWilliams said. “Once they are found they are brought in to be processed and into rehab.”

In January 2018, the area saw its largest cold stun in history. The center went from taking in an average of 30-40 turtles a year to 500 sea turtles in just 28 days.

According to the center, they realized an astounding 75 percent of the 500 turtles they encountered had the FP virus. On average, 30-40 percent of all turtles found on the Gulf Coast now have FP.

The center has become a prevalent leader in the fight against FP and has become one of the main facilities in the area to treat turtles with the virus. The center has a full surgical suite where they have performed countless laser surgeries to remove the tumors. This is the preferred method to removing them manually, which decreases the risk of regrowth.

Like the herpes virus in humans, FP will stay with these sea turtles for the rest of their lives.

Although there will always be a chance that the growths will reoccur, the center’s ultimate goal is to ensure that they spend enough time in the wild to co-populate.

While cold-stunned sea turtles and turtles with FP are some of the most common issues the center faces, they are not the only ones. Some turtles the center encounters have serious medical conditions that require immediate attention, some being more unusual than others.

“We deal with a lot of boat strikes,” McWilliams said. “One time we had a volunteer chase a coyote off a turtle’s neck.”

Like many nonprofit organizations, the people who work here do it for free. Day in and day out, the center directors, veterinarians and full-time volunteers work toward a unified passion.

Through small grants and individual donations, the center has rehabilitated hundreds of sea turtles, shore birds and raptors since opening in 2010. Volunteers perform night patrols searching for injured animals or, with the help of the community, those that are brought to their attention through an emergency hotline. All animal surgeries are done in-house by their veterinarian who doubles as the director. According to McWilliams, none of this would be possible if wasn’t for donations from visitors.

“We are the only facility out of all three in the area that are open to the public. To be able to make a connection with the locals about our environment and what we are doing here is very special to us.” McWilliams said.

Texas Sealife Center director of rehabilitation Amanda Terry also works at Amos Rehabilitation Keep, or ARK, another wildlife rehab center in Port Aransas. According to Terry, because ARK had no surgical equipment, there was an obvious need for the center.

“When we had wildlife animals at the ARK, we were taking them to whatever hospital our veterinarian happened to be at,” Terry said. “So, we just had to open our own wildlife hospital.”

But keeping the doors open has been a struggle. Surgeries for FP cost about $250 per turtle, and with the center being entirely funded by donations, the costs begin to add up.

Individual donations have been vital to center’s survival. About half of the center’s total revenue comes from the admissions fee visitors pay when they come in for a tour.

“Luckily our treasurer is really good at what she does, so she allocates for that in our budget,” McWilliams said. “But sometimes we can go a week without having a visitor in, and we begin to wonder how we are going to pay our bills.”

Over the years, the people who work in this facility have molded themselves into a tight-knit family. They crack jokes with one another on the job and go out for drinks after a long day of work.  Volunteers, after only a short time of working at the center, are immediately embraced by this tribe of individuals.

But more than anything else, they develop close relationships with the animals they see and work with on a daily basis.

For more information about the Texas Sealife Center, or if you are interested in volunteering, visit www.texassealifecenter.org.